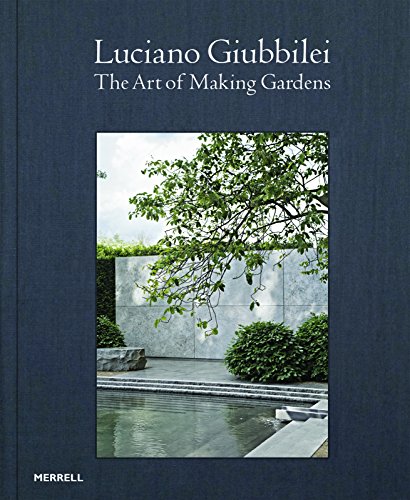 Since the 2015 publication of landscape designer Giubbilei’s first book, The Gardens of Luciano Giubbilei, he has grown enormously in his skills, refining his art so that his landscape designs now are more complex, varied and memorable.

Giubbilei opened his business in London in 1997 and has had a successful landscape design business with wealthy clients in Britain and Europe. He had every reason to be satisfied with his established style—and he was, except for his internal struggle, “to find the meaning in what I was doing.”

His search for meaning made him willing to consider his friend Paul Smith’s suggestion that his work, while superb, lacked the piquancy that in a culinary dish, “a squeeze of lemon” would provide. Smith wanted Giubbilei’s work to have that extra something that would make people never forget the garden they had seen.

With that prod, Giubbilei began his journey to learn how to elevate his garden designs from being merely technically excellent to ones that leave a permanent and powerful imprint on the mind.

He turned to Fergus Garrett, who had been Christopher “Christo” Lloyd’s head gardener at Great Dixter House in East Sussex, England. When Lloyd died in January 2006, Garrett was left in charge of the mid-15th century

house and the Arts and Crafts style garden originally laid out in the early 20th century by Sir Edwin Lutyens.

Lloyd’s exciting, iconoclastic sense of plant and color combinations, such as putting red tulips against lime-green euphorbia, made the garden famous,

As Giubbilei writes, “Before I came here, I hadn’t appreciated the thought and effort that go into each small section of the garden—into every single plant and its needs—while never losing sight of the bigger picture.”

The second part describes the new aesthetic emerging in his work. He had been apprenticing part time at Great Dixter for some months when he was invited to create his third Chelsea Flower Show garden.

Giubbilei writes that at Great Dixter, he had been, “absorbing its light, colours and textures and becoming attuned to its age, imperfections and depth. I felt steeped in the place and hoped this new show garden would reflect my increased connection to the earth and the subtleties of nature.”

It did. Designed for Laurentj-Perrier for the 2014 Chelsea show, it won a Gold and Best in Show.

Giubbilei continues, “In the past sculpture has tended to be the focal point of my designs, but this garden marked a subtle shift towards achieving more of a balance within the overall composition and atmosphere.”

Included in the book’s second section are essays by people whose work has inspired him: the Mallorquin artist Guillem Nadal on water, Ursula von Rydingsvard on texture, John Pawson on color.

Finally, Giubbilei focuses on fine crafted furniture and other commissioned garden pieces. He writes, “The people with whom we work—the builders, engineers, nurserymen and craftsmen—are all experts in their fields. We talk through ideas endlessly and experiment with approaches and materials. . . . Spending time in the company of such people, absorbing their environments—just as I do at Great Dixter—nourishes us creatively and allows us to move away from language that is familiar to discover new ways of working and new forms of expression.”

Summing up, Giubbilei writes, “My time at Great Dixter . . . has quite literally grounded me. I find myself going there several times a month, so that I can at last experience the passing of the seasons and the feeling of being in a working garden. My work there has also improved and enriched my practice in ways I never imagined. It has led me towards a much deeper understanding of plants and the work that goes into creating and maintaining a garden.”