Loving before Loving: A Marriage in Black and White 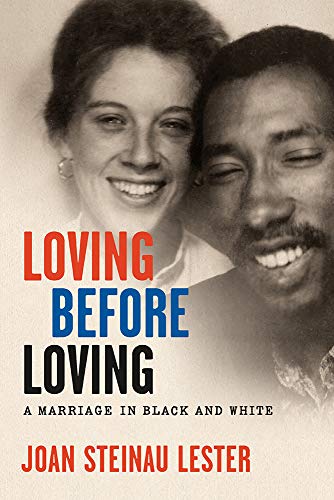 The personal is very political in this fascinating, beautifully written memoir. Lester has lived through interesting times, marrying her Black husband at a time when most states considered such unions illegal. That marriage eventually splintered apart and years later Lester found herself in another “illegal” relationship, this time with a woman. Only after decades together were they finally allowed to marry. The issues of racism and gender equality aren’t abstract concepts but ones Lester knows intimately. She brings a lifetime of experience to clarify and contextualize both Black Lives Matter and MeToo movements.

This is a unique life and a unique book, one that every freshman college student should read to better understand the history behind the earthquakes we’re feeling today. All ages will find much to treasure in these pages. Lester models how a white woman can combat “isms,” as she calls them, battling to turn them into “wasms.” All this happens while she traces her development as a writer. Her first husband, Julius Lester, was not only actively involved in the Civil Rights movement of the 1960s, he became a celebrated writer, with his wife his most important editor. Lester dutifully put her own writing on hold, prioritizing his work over her own until her feminist awakening, as another social movement rocked her world.

Lester started writing as a way of exposing social injustice. Beginning with essays and opinion pieces, she landed her first contract for The Future of White Men and Other Diversity Dilemmas. It’s a title that feels apt for now, not the ’90s, when it first appeared. As she explains, “Using writing as a tool of activism came naturally, meshing my two great passions. The era encouraged the form. In the ’70s, with the explosion of women’s magazines and papers, our stories began to see widespread print. .  . I had needed those years on my own, with nightly writing sharpening my skill, to claim the form. . . . I had found my voice.”

Lester’s worries for her biracial children, especially her son, are vividly resonant today. She describes racing her son to their parked car, after she tossed him her purse so that she could be faster. “We ran the few blocks, grinning. As we neared the car, two young white men yelled. I couldn’t make out the words and paid little attention. When we arrived at my old turquoise Toyota station wagon and leaned against the hood, panting and laughing, the men walked by staring. ‘Sorry,’ they mumbled as they passed, heads down. In a flash I understood . . . They hadn’t seen a family. They had seen a thief. . . . What could have happened if they had carried guns?”

Lester did more than talk the talk, she took action, founding Equity Institute with her new partner, Carole. Although Lester bowed out years ago to focus on writing, Carole stayed on as director and the company still exists, helping corporations understand how inclusivity strengthens rather than weakens them.

There is a wealth of material in this book, as Lester often found herself in the right place at the right time, from listening to Fannie Lou Hamer, the influential voting rights activist, to marching with CORE in the “Stall In” to protest racism at the 1964 World’s Fair in New York. It is a rarity to read a memoir that reveals not only an inspiring life, but a way to understand the broader history of the last decades. Anyone wondering why social justice is such a hot topic these days and what we can do to work for it will benefit greatly from reading Lester’s story.