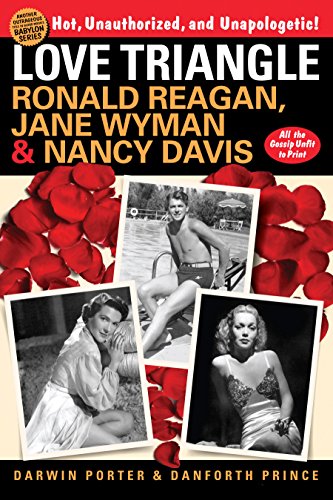 In picking up the subtitle All the Gossip Unfit to Print, the folks at Blood Moon Productions have, with their new volume Love Triangle: Ronald Reagan, Jane Wyman and Nancy Davis, more or less laid their cards on the table.

Theirs are biographies of a tabloid sort, structured as they are as a series of articles culled from any of several celebrity publications, from The National Enquirer to Us Magazine or the masterpiece that is the British publication called, with some degree of overstatement, OK! But let me be clear—the work here is all their own.

Mr. Prince and Mr. Porter have a preternatural skill for research and Love Triangle, like all their other works, is chockablock with film history, Hollywood intrigue and sexual abandon.  (Indeed, this volume, when paired with other Blood Moon Hollywood biographies, most essentially their no-holds-barred biography of Zsa-Zsa Gabor and her sisters, Those Glamorous Gabors: Bombshells from Budapest, makes the reader wonder how, with all the sexual hijinks going on, any movies at all managed to get made.

Given the trajectory that Blood Moon has taken, from Zsa-Zsa to their Monroe book, Marilyn at Rainbow’s End: Sex, Lies, Murder and the Great Cover-Up, to her most recent work Jacqueline Kennedy Onassis: A Life Beyond Her Wildest Dreams, it seems inevitable that Porter and Prince would cease upon the ultimate fusion between Hollywood and Washington, D.C., Ronald Reagan.

Let me note that, happily, while the fact of the Reagan presidency is alluded to a fair number of times, the focus of the book is on Hollywood Ron—a rather dense young man with unshakable liberal tendencies early on (Jane Wyman is said to have been appalled by his leftist beliefs) and an eye for the ladies. Further, he seems to have been a rather jovial homophobe who lived with the belief that all men who were sexually interested in other men were first and foremost interested in him (while never quite connecting the dots that Hedda Hopper’s son William was so very friendly because he was interested in taking their friendship a bit further).

Reagan worked for Warner Brothers, where he was considered “The Errol Flynn of the B’s,” an actor of no great talent and just enough looks to get by.

He had better luck with women then he did with Jack Warner, however, and, as the title suggests, became the center spot in the isosceles object formed by himself, his first wife Jane Wyman and his second wife, Nancy “Mommy” Davis.

The fact that Davis comes third, both in the title and, indeed, throughout the book in which she is often more or less an afterthought, is perhaps intentional, or perhaps Freudian, but certainly very interesting.

As the book attests, Davis had to first attempt suicide (or at least pretend to) and later get pregnant with the child that would become known as the Reagan family black sheep and Playboy model Patti Davis in order to get Ronnie to marry her.

But this does not come as a surprise.

What does is that, in her youth, Davis was apparently well known and well respected throughout Hollywood for a certain oral skill, which seems at the very least surprising, but, then again, this is “All the Gossip Unfit to Print.”

What comes as a happier surprise is that Jane Wyman was, in her Hollywood heyday, witty, smart-mouthed, and a party girl who at once began to regret her marriage to Reagan when she realized that he liked to stay home nights and watch television. Turns out that Wyman was more like the “Hey-Hey” girl that Hollywood dubbed her than she was the ultra Catholic, mega Conservative Vineyard Matriarch that she morphed into in later years. Indeed, Wyman, and not Reagan, is the heart of the book and its chief object of desire, as she was and remained the great love of Reagan’s life.

The push-me, pull-you of the book’s core triangle makes for great reading, most especially when Nancy Davis sets her sights on Reagan and allows nothing on earth to get in her way. Also nifty are the ancillary conversations in which Wyman spills to her buddies Joan Blondell and Lucille Ball and everyone talks like a wisecracking dame in a Damon Runyon story.

And while the book does not stint on True Tales of Hollywood involving Davis, Reagan and Wyman, all of Old Hollywood shows up, most especially Erroll Flynn, who most certainly deserves a Blood Moon Edition all his own. But Gable’s here as well (Nancy Davis apparently had a brief flirtation with him), and Lana Turner too. And Stanwick and her husband Robert Taylor, and Dennis Morgan, who had a long affair with Jane Wyman both before she married Ronnie and during their “America’s Sweethearts” phase.

Included as well in these pages (and, for the first time, actually explained) is the another Hollywood triangle, one a great deal more interesting than any involving Ronald Reagan.

This one included actors Van Johnson and Keenan Wynn and Evie Wynn, a woman who would ultimately be married to both men.

What makes this triangle interesting is that it at first involved only the two men; Evie joined in later on. And when Louis B. Mayer at MGM became concerned about the rumors spreading concerning his star Van Johnson’s sexual interests, he ordered the actor to marry and marry immediately. So Johnson married the woman at hand, Evie, and the three continued their triangular relationship. And what was presented publicly at the time as a betrayal of friendship was, in all actuality, a pretty nifty solution for all concerned.

In the book’s main story, the Hey-Hey Girl wisecracks her way through any number of brainy best friend roles in B pictures.  But she hung in there and ultimately through sheer force of will made the producers take her seriously—seriously enough indeed to end up playing a deaf mute and winning an Academy Award for Johnny Belinda. And Ronald Reagan, having reached the zenith of his movie career having his legs chopped off in King’s Row (and uttering the now famous line, “Where’s the rest of me?”) went first into television and then into politics.

For her part, Nancy Davis, having endured playing the virtuous and patriotic American housewife in clunkers like The Next Voice You Hear, decided that she was better off married.

Love Triangle, like all the other Blood Moon books, is a real page-turner. Indeed, the pages smoke and spark and threaten to burst into flame, so quickly do they turn, and the seven hundred pages fly by anecdote by anecdote.

And all the best anecdotes belong to Wyman. Like this one, in which an embarrassing event for Jane Wyman becomes Hollywood history and the fodder for Hollywood fiction.

There was a time, you see, when Jane Wyman and none other than Marilyn Monroe vied for the same man. Not Ronald Reagan. A handsome Hollywood player named Fred Karger, who would end up dumping Monroe and marrying Wyman (twice).

After the first marriage, Marilyn Monroe reportedly vowed revenge on the older actress, shouting, “that bitch will get hers.”

“Her revenge on Jane was enacted through a chance encounter. The event, which became notorious in Hollywood history, also occurred at Chasen’s, this time in the ladies’ room.

“When Marilyn entered the lounge, she spotted Jane in front of the mirror, applying fresh lipstick. Details are missing. They obviously had words, and another woman in the lounge later reported that she heard Jane call Marilyn ‘a cheap little bleach blonde trollop.’

“At that point, Marilyn lunged at Jane an ripped off her wig. Because of a scalp irritation, Jane had worn a wig that night to conceal her condition.

“Jane screamed as Marilyn quickly exited from the ladies’ room.

“Within the week, the novelist, Jacqueline Susann, head of the incident, which later became the most dramatic scene in her best-selling novel Valley of the Dolls. The encounter was also depicted on the screen in 1967, with the real-life Susan Hayward cast as the diva who gets her wig ripped off . . .

“Many years later, at a party in New York, a hostess introduced Jane to Susann. Jane glared at the hostess. ‘I’m a lady. Why should I want to meet this piece of trash?’ Then she turned her back on Susann and walked away.

“’If that’s a lady, I’m the Queen of Sheba,’ Susann told her hostess.”

With Love Triangle, Danforth Prince and Darwin Porter seem to have crossed a new threshold. Resistance, it seems, is futile.

While not as lovingly nutty as the Gabor book, or as acid-washed as their other triangle—Pink Triangle, their joint biography of authors Truman Capote, Gore Vidal and Tennessee Williams—this Real Hollywood tale of love, loss, Academy Awards, Douglas Sirk movies with Rock Hudson (where’s his Real Hollywood bio?), hiding out in Hollywood during WW II while all the other actors are fighting the war like any patriot should, obsessive love (Ronnie for Jane, Nancy for Ronnie), ballet dancing sons and White House china is just plain not to be missed. It is to be savored, as all the Gossip Unfit to Print should be.

Oh, and coming up next from Blood Moon Productions: something called Bill and Hillary: So This is that Thing Called Love.

Apparently, there are stained blue dresses on all our horizons.