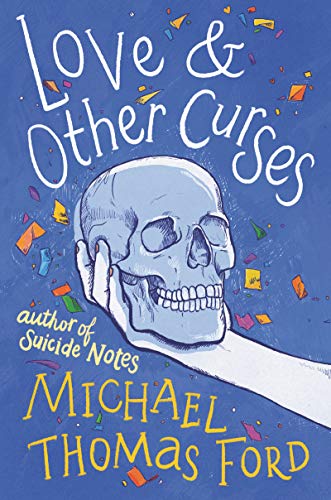 “Anyone looking for a deep, thoughtful story about love and life and coming of age will enjoy the relationships, the search, and the lovely magic that may or may not be a part of every person’s life.”

Sam Weyward’s life is not what most people consider “normal.” His mother left when he was a baby, so he has been raised by his dad and the three Grands— grandmother, great-, and great-great. These women believe in magic, his dad believes in eighties hair bands, and Sam . . . well, Sam’s not sure what he believes in. He’s not even sure who he is. He’s trying to find himself, and one of the places he searches is at Shangri-La, a gay bar where he discovered a second family.

“My drag name is an ongoing topic of conversation at the Shangri-La. Everybody has an opinion. But I don’t know who I am yet. Besides, it will be another four years before I can even legally perform here. By then I might be an entirely different person.”

Sam, who came out to his dad a couple years ago, is searching for that first love. He’s also afraid to find it, because his family suffers from the Weyward Curse, a spell cast on his family generations earlier, which says that if one of them falls in love before their 17th birthday, the object of their affections will die. That kind of puts a crimp in Sam’s plans.

But then Tom Swift comes to town. He shows up at the Eezy-Freezy, the Weywards’ ice cream bar, and quickly finds a place in Sam’s heart. But it’s complicated. Tom isn’t gay; he’s trans. He likes girls, so he’s not interested in Sam romantically. Their friendship takes many turns, and sometimes Sam isn’t sure he even likes Tom anymore, let alone loves him.

Sam tries to figure out his world and the people around him, but it’s hard to see who people even are. Or if they know who they are. Just like Sam.

“I remember something Lola said to me once: ‘There are all kinds of drag. Sometimes it looks like wigs and makeup; sometimes it’s just a face someone shows you when they’re afraid to show you their real one.’ I didn’t know what he meant at the time. Now I get it. You can’t know who someone is just by looking at her. And maybe you can never really know. Maybe people always have secrets that they don’t tell a single other person.”

Love & Other Curses is a book with heart—a big, generous, loving heart. Sam is likeable and complex, as are all of the people who surround him, from his family to the drag queens to his friends. His journey is filled with questions and pain, but also love and kindness. Anyone looking for a deep, thoughtful story about love and life and coming of age will enjoy the relationships, the search, and the lovely magic that may or may not be a part of every person’s life.