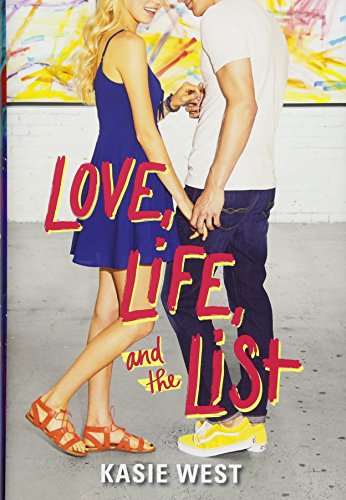 Many young adult novels can be enjoyed by readers from 8 to 88. Others are tightly aimed at teenagers. Love, Life, and the List is one of those, seeming focused on Very Today teens in wealthy suburban California. Thus there may be a generation gap between the characters and readers, not to mention an income gap and a geographic gap that the novel does little to ease.

For those whose reality lies outside the privileged sphere of the story, it takes work to get past the dialogue. Much of it is chirpy and twerpy, like chatter written by adults for a Today Teens sitcom. It provides charm and entertainment but masks the plot and soul of the novel. When these finally emerge, the book comes alive.

The real story is Abby’s discovery that to be a genuine artist, you must be more than a skilled technician. This blow is delivered by her boss at the museum where she works, when she tries to get around the age rule of an annual art exhibit and talk him into accepting her work for display. He tells her:

“[Y]ou’re not ready. Your paintings aren’t good enough yet. . . . They’re technically good, but they look like you copied a picture. I want to feel something when I look at your paintings. They’re missing a layer, and that’s understandable. You’re young. You haven’t experienced enough in life to add that depth to a painting. But you will. You are exactly where you should be in your progression as an artist. Just keep moving forward. You’ll get there.”

Because she thought she was already there, Abby take the critique hard and loses her self-esteem. All her life she has been applauded for her precocious talent and made to feel special, only now to be told she isn’t.

But she’s got spunk as well as talent, so after wallowing in self-pity for a while, she bounces back and sets out to gain the experience that will give her work emotional impact.

The clue that she needs it comes during a conversation she has with her best friend, Cooper. She says, “I have an agoraphobic mom and a war-zone dad. . . . How much deeper can a person get?”

If this were a literary novel, life would show her in a hurry just how much deeper and worse things could get. However, it’s a light romance built around life lessons, which Abby learns well enough to turn the book into a coming-of-age story.

Working with Cooper, and aided by her family, she puts together a list of things to experience that should broaden her heart and mind, thereby enriching her artwork. The experience list includes facing a fear, witnessing a life beginning and ending, trying new things, and learning a stranger’s story, among others. All must occur in just a few weeks, during which she also must paint new pictures showing her new depth so to gain a second chance at getting into the art show as well as the art school she craves to attend.

Most of the time her attention is focused on trying to win Cooper’s heart. Working on the list with him allows them to grow closer; also to get tangled up in misunderstandings that leave their outcome as a couple in doubt. But their story never strays from learning about love and life, thanks to the list, making for an aptly named story that lets life lessons go down easy for young people needing to learn them.