Love and Other Poems 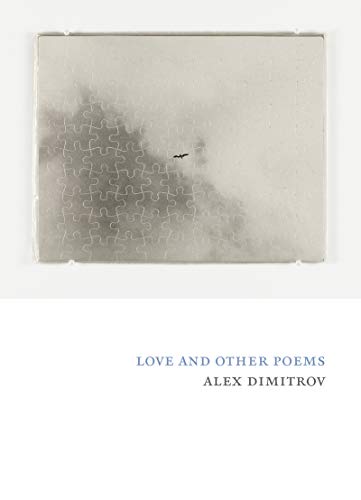 There is a large discussion in the world of poetry about how to proceed with the expanding legion of what are derisively called “Instagram poets,” as comers from all corners argue about whether or not attention-seeking young poets on Instagram are going to bring about either the great renaissance or untimely death of American poesy. Many of the folks in these conversations feel like passengers in a tiny Cessna, tumbling angrily toward its fiery demise, who watching out the window need to debate the color of the fronds of all the forest trees the plane careens past, on its way down.

Alex Dimitrov’s third and newest title, Love and Other Poems, provides an opportunity for both sides to argue their case. Dimitrov here provides a bridge between some established and accepted poets—one can feel deeply the influence of Dorothea Lasky—and the latter-day generation of well-compensated and debatably talented “Instagram poets” whose work is often viral but rarely insightful.

Conrad’s abstract and delightful Frank poems find some echo in these pages, as does another Frank, Frank O’Hara, who owns the book’s epigraph, Meditation on an Emergency’s “All I want is boundless love,” and whose “Having a Coke with You” Mr. Dimitrov adapts with his more contemporary “Having a Diet Coke with You.”

That Dimitrov has a lot to read is in no doubt; that he has something to say seems less certain.

There’s an old canard among parish priests that when one does not have much of anything to say for their Sunday sermon, they can always just give a homily about love.

This book, as the title implies, is a homily about love, written for just the same reason.

Here it comes in the form of a ten-page list poem about love, cleverly titled “Love,” that features a list of things the poet loves, likes, admires, or has at least heard of. It is a homily about love of which any priest could be proud, but also one about self and self-marketing, a cascade of brief sentiments that feel deep to a certain sort of person:

I love all of my past lives.

I love the last moments before sleep.

I love standing in front of the ocean.

I love Paris for being Paris.

In the nearly 200 items on the list of things Dimitrov loves, he neglects to mention myself, but uses the remainder of the book to alternately correct the oversight or reinforce its absence, with poems like “Places I’ve Contemplated Suicide or Sent Nudes From” (another list poem which, like “Love,” does what it says on the box) or “Poem Without God,” whose entire text reads “I waited so long/ with one drink in the same bar./Finally, I stepped out to have a cigarette alone.”

It is a work that erases itself and restores itself in layers, a palimpsest of fortune cookie wisdom, a retort to the conversation of the passengers of that Cessna before it dashes itself against the soil: that, yes, Instagram poetry (and its heirs and acolytes) can, in Pinocchio-like fashion, grow into a real book.

If the work seems trite, it’s only because Dimitrov has worked exceptionally hard to make it so.  “You need so much help,” the moon tells Dimitrov in one poem, “You need an NEA, a Guggenheim, a National Book Award,” in response to his never having won a grant. The entirety of his poem “Yes is We have always been lonely.” His “No” is “We’re not allowed even loneliness long.”

This is a challenging book to applaud, but still it is not without merit: there is a love of language here, and of reading, that is impossible to ignore. Nestled inside this book are a hundred others —Kerouac, O’Hara, Ginsburg, Ferlinghetti at the front—and there is an optimism in this work, especially in the changing winds of life as a gay man in America, that feels refreshing in an increasingly negative time.

It is a homily in need of refinement, yes, but about a topic that is evergreen precisely because it is ever-present. In his poem “More,” Dimitrov writes “Whatever enough is, it hasn’t arrived,” and that may be true here, too, that like the speaker in “Poem Without God,” the reader here is waiting in the saloon, a cocktail in one hand and a soft pack of cigarettes jostling tenderly in the other. One expects that, as Dimitrov climbs out of other work and further into his own, that his certain fourth book will have less “Love,” but far more love, to its credit.