Love and Death Among the Cheetahs (A Royal Spyness Mystery) 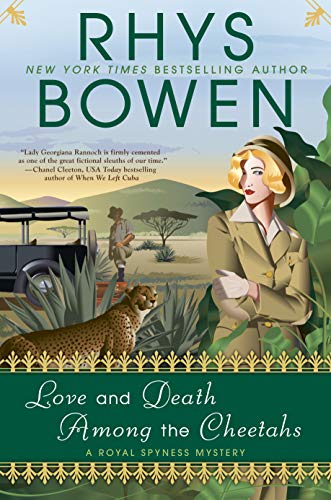 Lady Georgie Rannoch has come a long way since the Royal Spyness series began. As 34th in line to the British throne, Georgie is one of the royal family’s poor relations, and despite having a title she’s always had to make her own way through life.

This was challenging in the 1930s, when women in general and royal women in particular were barred from most occupations. Unwilling to make a suitable marriage match, Georgie tried many demeaning ventures, finally settling into discreet sleuthing for the queen.

Eventually she met her own Mr. Right, Darcy O’Mara, and here in volume 13 they’ve just tied the knot and are trying to get away for a honeymoon. Darcy is also an impoverished aristocrat, and he, too, is a discreet sleuth, though he works undercover for the British government instead of the royal family.

Predictably, sleuthing provides the means for the couple’s honeymoon. They find themselves on an all-expenses-paid trip to Kenya on the eve of World War II, when the evil powers fueling Hitler’s rise are spreading their tentacles around the world.

The Kenya they visit is still a British colony, with a settlement of wealthy and ex-military English and Europeans on its Highlands. The region has been dubbed “White Man’s Country,” not just for the concentration of paleskins. The privileged whites there dominate and disrespect the dark natives and exploit them as servants while pushing the country to conform to Britain’s class-restrictive society and industrial economy.

The group Georgie and Darcy land with is excessively decadent and rapacious. Among them are a jewel thief and a Nazi sympathizer—Darcy’s targets—plus the bad-boy heir to the British throne and his scandalous American mistress—Georgie’s targets. The combination is trouble destined to happen.

And happen it does, ultimately escalating to murder. A great white hunter is found stabbed to death, then half eaten by a lion. This “bwana” was hated by many for his personality, respected by a few for his business and environmental savviness, and irresistible to certain women for his machismo. He incited homicidal urges in almost everyone he interacted with. Even Georgie and Darcy were tempted after the bwana’s aggressive advances toward Georgie.

He was a key player in the isolated nest of Georgie’s corrupt countrymen. Through them she gets not only a slew of suspects but also a shocking education in the vices and violence she’s always been protected from. Some honeymoon! At least she’s able to go on safari, not to mention an adventurous trip halfway around the globe via multiple means of transport. The travel descriptions slow down the plot but add depth and interest for readers.

The author is well regarded for the accuracy of her historical novels, and in this book like others she appends a note mentioning what facts she derived the story from, and where she took liberties for fiction. She also includes a bibliography of her source material. Thus, Georgie and Darcy’s long trip between continents, as well as what they find on either end, is informative and interesting.

Unfortunately, the helpful notes in the back are countered by an apologia in the front wherein she (or her publisher) felt the need to explain to readers that people in the countries of the period treated each other badly in terms of racism and sexism, and any icky content contained in the book does not represent the author’s personal views.

This opener reeks of political correctness marketing pressure, as such a disclaimer is unnecessary for and insulting to historical fiction. The job of historical novels is to convey time, place, issues, and character realistically through story. (That’s the job of all novels, but it’s particularly important in historicals.)

The Royal Spyness series is considered “cozy” and lighthearted, so perhaps its production team felt they would lose audience if they offended anyone’s modern sensitivities in a recreational read. However, the audience they are likelier to lose is people who respect literature as a vehicle for conveying truth, and those who want to learn about and understand history through their pleasure reads.

Since Love and Death Among the Cheetahs presents sound literary and historical qualities as well as entertainment, it’s sad that our times demand it apologize for itself before the story even starts.