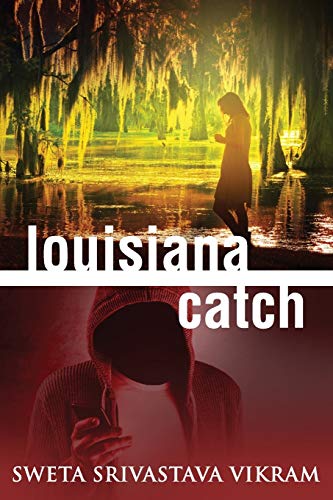 “This book will be a welcome addition to modern-day discussions of women’s rights, multiculturalism, and online technologies.”

Set in New Delhi, India, and New Orleans, Louisiana, with visits to New York City, Louisiana Catch is modern contemporary women’s fiction at its best. Told in a fast-paced, almost memoir-style of writing, the book sweeps readers away from location to location, continent to continent, not unlike its characters.

Ahana Chopra, the main character, is living in New Delhi, divorced from her abusive husband, tired of gossiping Indian women relatives, and struggling to keep her head above water. The everyday life of a well-educated, connected society woman disillusioned with life is portrayed very well:

“What had happened to New Delhi? This was not the Delhi where I grew up. With friends and family, eating ice cream at Connaught Place. Attending loud summer weddings. My mumma sitting with masis on summer evenings and gossiping about everyone in the family, exchanging stories about their neighbors, in-laws, colleagues and maidservants. My dad teaching us all to play cricket.”

Vikram has painted bold characters with multifaceted, over the top personalities. Although the book is often guilty of telling versus showing, the action-packed pages make this a completely forgivable offense. Ahana is neurotic, stressed out, full of grief from her mother’s death and fear from her husband’s abuse. She trusts nobody and thinks the worst of everyone. Her passion for women’s rights is clearly the focus of the story.

While a thriller-type women’s fiction on the outside, Louisiana Catch is in reality a commentary on social and technological issues that plague modern society. Ahana develops online relationships with people such as Jay and Rohan, both of whom she thinks she knows but is mistaken. The story expresses how current social media technology allows online and actual personas to blur and be confused, how what we see online is often inaccurate and can lull us into a false sense of security.

Indian society with all its flaws—poverty, sexual harassment—is laid out by Vikram. “Across the street from the club, there were families sleeping on the pavements in the seething heat. There was a little girl baking rotis on the side of the street, feeding her toddler brothers, and shooing away street dogs.”

Equally front and center is the topic of sexual and physical abuse suffered by Indian women. It is the major theme of the book, since not only is Ahana a victim, but a major plot point includes her organizing a women’s conference titled No Excuses! Through the story’s progression, readers witness a sort of social and personal growth of Ahana, who transforms from a protected woman to one who suffers through the harsh realities of life. At the same time the ugly, dangerous nature of the online community and social media is laid bare for readers to think about.

Vikram is no stranger to women’s issues. She’s a bestselling author of 11 books— Louisiana Catch being her American debut—as well as a certified yoga and Ayurveda counselor. This book will be a welcome addition to modern-day discussions of women’s rights, multiculturalism, and online technologies.