Louis XIV: The Power and the Glory 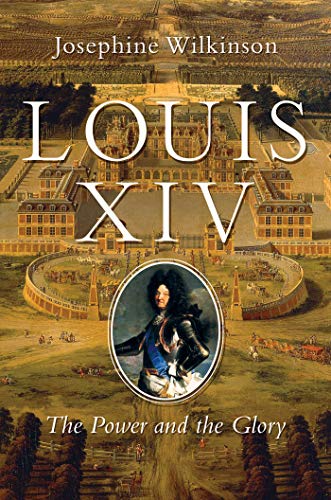 “In this book, the personal overwhelms the political. Wars and diplomatic events are the sideshows to court intrigue, Louis’s sexual dalliances, gossip, the petty rivalries among of the men and women of the king’s entourage, and lavish entertaining.”

The subtitle of Josephine Wilkinson’s new biography of Louis XIV is misleading. Instead of The Power and the Glory, it should read An Intimate Biography. In this book, the personal overwhelms the political. Wars and diplomatic events are the sideshows to court intrigue, Louis’s sexual dalliances, gossip, the petty rivalries among of the men and women of the king’s entourage, and lavish entertaining.

Louis XIV, the Sun King, so dominated an era of European history that Will and Ariel Durant titled one of their story of civilization books The Age of Louis XIV.  The Durants are notably absent from Wilkinson’s bibliography. Theirs was history and biography on a grand scale. Wilkinson’s biography is anything but grand. It is, instead, mundane.

It’s not that the personal is unimportant in biographies of great world figures, but their greatness lies not in petty details of the furnishing of their bed chambers, or vivid descriptions of how they danced, or who they slept with, or the food they ate at lavish dinners, or the petty jealousies of their associates, or what foods their lovers ate to maintain their figures, or how the servers were dressed at court events.

Wilkinson seems to be consumed by such things. A few examples, among dozens in the book, betray her biographical interests:

“The court then went to supper. Everyone ate to the sound of music . . . while dancers dressed as the twelve signs of the zodiac and the four seasons performed a ballet. . . . The servers were dressed as harvesters and grape-pickers, while men dressed in frosted costumes, their furs and dance steps representing coldness and weakness, carried bowls filed with artificial ice and snows.”

“On one occasion, Louis [as a young child] misbehaved and his mother threatened to spank him, telling him that it was she who had the authority, not him . . .”

“The comte d’Harcourt . . . came next [in the cavalcade], bearing the king’s sword in a blue velvet scabbard powdered with golden fleur-de-lis. His doublet was of cloth of gold and silver, and he was mounted upon a dapple-gray charger whose crimson trappings were embroidered with gold in Spanish point, with two scarves of black taffeta for reins.”

“With the sun now beginning to set, the court returned to the chateau, where a medley of dishes prepared by Foucquet’s steward, Vatel, was served. As twenty-four violins played softly in the background, the eighty tables and thirty or so buffets groaned under the weight of the fine dishes, which included pheasant, ortolan, quail, young partridge, bisque, ragout, and a wide selection of wines . . .”

“Louis continued to spend most of his time at Marie’s side, and not only the court but the people began to murmur about their passion. Ann was in despair; every time Louis came to see her, Marie was by his side, and she would whisper in the king’s ear even as he spoke to his mother.”

“As she sat in her darkening apartments, a depressed Louise brooded upon her situation. She knew full well where Louis would go after the ball finished, and the thought of him spending the night hours in Athenais’s warm embrace was more than she could bear.”

“[Lauzun] brought out the giddy schoolgirl in her, and she managed to persuade herself that he was just as amorous of her as she was of him.”

Sprinkled in between such passages are brief references and sometimes a few pages about the Fronde, the Edict of Fontainebleau, disputes with the Vatican, diplomatic jousting with other European monarchs, wars and peace treaties, and the construction of the palace and grounds at Versailles.

There are some useful passages devoted to key ministers such as Mazarin and Colbert. Wilkinson notes the increasing costs of Louis’ wars and the consequent effects on the French people. Again, it’s not that Wilkinson ignores key historical events, but her emphasis throughout the book on the personal Louis obscures the reasons why biographies of the Sun King are so important.

It is perhaps fitting that she concludes her biography with the chronology and details of Louis’s last days and death without offering reflections on his rule and its importance to French and European history.

Contrast that to the Durants who in The Age of Louis XIV ended with this rhetorical flourish: “He waged devastating wars, indulged his pride extravagantly in building and luxury, stifled philosophy, and taxed his people to destitution; but he gave France an orderly government, a national unity, and a cultural splendor that won for her the unquestioned leadership of the Western world. He became the head and symbol of his country’s supreme epoch; and France, which lives on glory, has learned to forgive him for almost destroying her to make her great.”

That is how history and biography should be written.