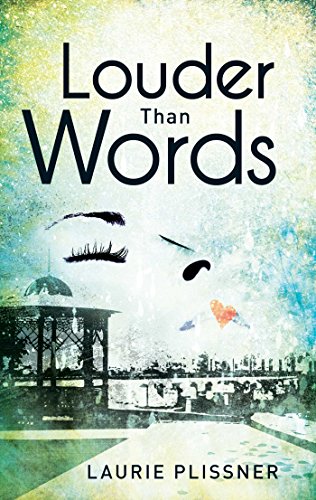 Louder Than Words tells the story of a teenage girl who must uncover her past in order to pursue her future.

Sasha’s nightmare begins the day she turns 13 and awakens in a hospital bed, physically sound but with no memory or voice.

Sasha is locked into the vacuum of her subconscious mind, a mind unable or unwilling to release the horrors that it holds. Doctors tell her she suffers from a phenomenon known as hysterical mutism caused by post-traumatic stress.

And despite years of psychiatric sessions, Sasha shows little improvement, causing her to feel as much if not more frustration as those who treat her. And underneath the hurt is the anger.

Sasha’s school years have not been pleasant. She becomes rude, belligerent, and spends most school days in detention. Despite having to use a voice-synthesizing device, Sasha manages to get punished daily for bad language, a lousy attitude, and constant class disruption. And at 17 years old, Sasha’s pretty face and well-developed body also attract attention of a different kind.

Sasha is a train wreck waiting to happen.

Then Sasha has an extraordinary experience at her favorite place: the public library, where talking is not encouraged, allowing her to feel more comfortable. A really cute guy sits near her, and Sasha makes some nasty remarks to herself, knowing the futility of ever having a boy like this one interested in her.

He gets her so flustered that she leaves, forgetting her coat. The day has turned dark and cold as she walks home alone to wait for her aunt and uncle to get home from work.

Four of the jocks and hoods from detention attack her and attempt to rape her. At the last moment, when she's lost all hope, the boy from the library appears with a pair of numchucks. He takes on all four guys, and after a few swings at them from the chains, they take off and Ben Fisher walks Sasha home.

He tells her he heard her in his head and came to help. Sasha is finally convinced that Ben can hear others’ thoughts, and at that moment Sasha's life becomes bearable.

If Ben’s mind reading ability isn't enough of a surprise, Sasha realizes from his description of his home that he lives in her old home, 7 Seashell Lane. Having some of her memory return frightens Sasha—she's not ready to remember the awful night she lost her parents and older sister in a fatal car accident. Seeing her old home still furnished with her family furniture would surely drive her totally insane.

Sasha refuses to report her sexual attack. It would only make her even more of an oddball. Her best friend Jules tells her the next day that all four boys had something toxic put into their jockstraps, almost causing the need for amputation of the boys’ private parts. Sasha is horrified that Ben feels perfectly justified in using a natural, harmless, food substance as revenge.

Ben and Sasha are drawn together like magnets, perhaps because they are both oddities, although Ben accepts his gift, which helps Sasha feel like a normal teenage girl in love with a handsome dark-haired boy.

Because he can read her thoughts, her vulnerability is unmasked and she suffers through some embarrassing moments, but she feels a closeness to him she has not felt since she lost her memory and her voice. More important, she can at last feel some semblance of normalcy.

That is, until things start getting decidedly less normal.

Author Laurie Plissner’s debut novel portrays a defensive and smart-mouthed yet funny girl, damaged by tragedy, whose journey to recover her lost memories includes rediscovering herself.

The protagonist’s shocking findings are both frightening and dangerous, and the nonstop action draws the story to a most unlikely and terrifying ending.