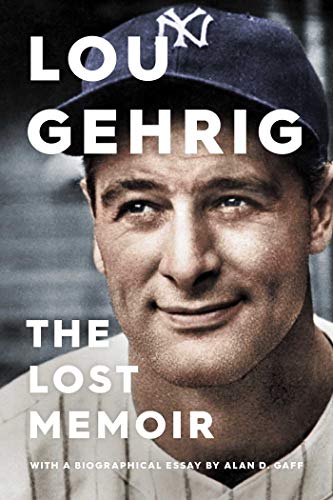 Alan D. Gaff is, among other things, a prolific military historian with ten well-received books dealing with various military campaigns and subjects. Lou Gehrig: The Lost Memoir is his first publication on a non-military subject. It was while doing research that Gaff came across some of the Gehrig columns. Gaff’s interest was piqued, and he went looking for more of them. He found all but a few of these columns in the Oakland Tribune.

Lou Gehrig: The Lost Memoir was the result of Gaff’s discovery. This interesting little volume contains two distinct sections: The first is a reproduction of Gehrig’s columns, and the second is an extended biographical essay written by Gaff.

The columns, Gaff believes, were in all likelihood written in collaboration with a ghostwriter, although he received assistance with the World Series numbers from the sportswriter and future Commissioner of Baseball, Ford Frick. They were written during the 1927 season from mid-August through the World Series. Christy Walsh, Babe Ruth’s agent, convinced Gehrig to write the columns and promoted them through newspaper syndication.

Over the years, these columns had vanished from archives and memories, but some survived, and Alan Gaff was able to collect them all. The result is this volume that casts one more light on the 1927 Yankees, considered by many to be the greatest team of all time. The columns have the feel of authenticity that many such columns ghosted from this period do not have.

The accounts of Gehrig’s life from early childhood through the ’27 World Series are a delight to read. Gehrig reveals a great deal about himself and his insecurities, both in his youth and in his years in professional baseball. The close relationship with his mother and his sense of obligation to his parents were powerful forces in his life.

In dealing with baseball, Gehrig’s love of the game is palpable and his sense of his great good fortune playing for the Yankees is clear. Well before his farewell speech at Yankee Stadium on July 4, 1939, he considered himself, “the luckiest man on the face of the earth.”

The Yankee first baseman has very interesting observations and comments on his teammates and opponents. He loved Babe Ruth and found him endlessly fascinating and amusing. (These columns were written before their falling out.) His description of and admiration for Ty Cobb may be surprising to many fans. He also had great love for his manager, Miller Huggins, and he affectionately describes many of his teammates whose personalities and strengths he admires.

The second section of the book is less revealing, but, nonetheless, a useful addition to the book, especially for those not fully familiar with baseball, Lou Gehrig, and the world of baseball. There are no new revelations, but Gaff produces a smooth and basic narrative of Lou Gehrig’s life beyond the scope of the columns and through to his tragic death. The material on Eleanor Gehrig, Lou’s wife, are informative and helpful.

Gaff points out that this was Gehrig’s fifth season as a Yankee but only his third season as a full-time player. Underlining his greatness, 1927 was also Gehrig’s first of 12 consecutive seasons in which he hit at least 27 home runs and drove in at least 114 runs. By the end of that season, Gehrig was second only to Ruth in popularity among Yankee fans.

The treatment of Gehrig’s illness and long struggle with ALS is powerful. Gaff reminds us that Gehrig lived for nearly two years beyond his farewell speech at Yankee Stadium, and, in those years, he served others while coping with the pain and suffering of his own relentless physical deterioration.