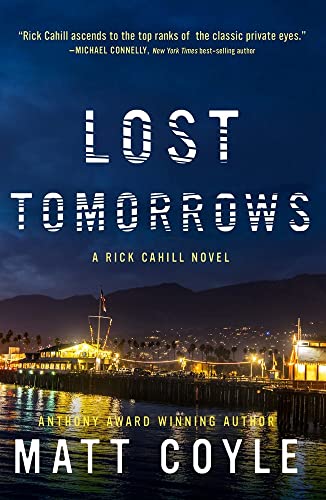 “In Rick Cahill, Coyle has created a deeply flawed, but eminently sympathetic, protagonist. Who among us isn’t demonized by our failures, and who isn’t occasionally overtaken by a deep-seated need for redemption? And who wouldn’t be envious of Cahill’s panache in dealing with both?”

Every now and then, a new writer makes a splash with a debut novel, then disappears from the literary world—think Harper Lee or Margaret Mitchell. Others continue to write, but subsequent works fail to live up to the original. And then there are those who start strong and get stronger as they exercise their literary muscles. Put Matt Coyle in that last category.

Coyle’s first Rick Cahill thriller, Yesterday’s Echo, won the Anthony Award for best first novel; his second, Night Tremors, was an Anthony finalist, as well as a finalist for Shamus and Lefty awards; and his third . . . well, you can see where this is headed. Now comes Lost Tomorrows, his sixth and, in this reviewer’s opinion, best Cahill novel.

Readers first met ex-cop Rick Cahill while he was running Muldoon’s Steak House in La Jolla, with a dark cloud mushrooming over his head as a result of his ignominious departure from the Santa Barbara Police Department after being suspected of, but never charged with, the murder of his wife Colleen. That cloud followed him for the first five books of the series, but in Lost Tomorrows, Cahill may finally find the truth behind Colleen’s murder, clear his name, and dissipate the cloud.

Cahill has traded in running a restaurant for being a private investigator, albeit one with questionable ethics. He poses the question rhetorically: “I’d done things that would have put me behind bars if I’d been caught. All in a quest for the truth . . . What scared me most, was that breaking those laws bothered me less and less . . . What kind of a man was I?” And then he answers his own question: “One I finally realized I couldn’t live with anymore.”

When Cahill’s former training officer in Santa Barbara, Krista Landingham, is killed late one night in an apparent hit-and-run at a location where she had no business being, her sister Leah hires Cahill to determine whether Krista’s death was an accident or a homicide. As part of the engagement, Cahill must team up with former SBPD detective-turned-P.I. Jim Grimes, the very detective who had investigated—though Cahill might say persecuted—him for Colleen’s death.

Grimes and Cahill make an unlikely alliance, at best, with past grudges tainting their relationship from the start. But the past soon bleeds into the present when they discover that Krista had recently reopened the cold case murder of Colleen Cahill. What’s more, the ethically challenged Cahill quickly concludes not only that Krista was murdered, but also that “Colleen and Krista’s deaths were linked. I felt it in my bones. And one person was responsible for both.”

Convincing Grimes is not as easy as convincing himself. Worse yet, Cahill’s earlier stated fear that breaking laws bothered him less and less bears more fruit in his quest for the truth behind the 14-year-old murder of his wife. In fact, it is shocking to learn exactly what means Cahill will ultimately rationalize as justifying his ends. And, in addition to Grimes and his client, the author takes the reader along for a tension-packed ride of uncertainty, worried as much for Cahill’s emotional salvation as for his physical safety.

In Rick Cahill, Coyle has created a deeply flawed, but eminently sympathetic, protagonist. Who among us isn’t demonized by our failures, and who isn’t occasionally overtaken by a deep-seated need for redemption? And who wouldn’t be envious of Cahill’s panache in dealing with both?

Southern California has turned out its fair share of thriller and noir superstars (some of them transplants, of course, before making their names on the west coast), such as Michael Connelly, Robert Crais, T. Jefferson Parker, James Ellroy, Raymond Chandler, and Ross MacDonald. Matt Coyle is quickly writing himself onto that list.