The Lost Shtetl: A Novel 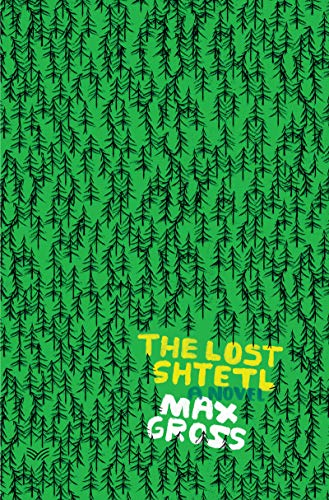 In Jewish Poland Revisited: Heritage Tourism in Unquiet Places, sociocultural anthropologist Erica T. Lehrer describes the ghostly remnants of Jewish shtetl life and culture that surface in modern-day Poland, and the minor cottage industry that has sprung up around these sentimentalized fragments of a lost world, sometimes played for their kitschy appeal to tourists, in other instances represented with a reductive reverence. Like antique postcards once sold at lynchings, or Thoreau collecting arrowheads, Lehrer describes the souvenirs and Jewish cultural representations that abound in Polish tourist destinations like Kazimierz: “There are blond Polish singers who perform pitch-perfect Yiddish klezmer tunes; a village ice-cream vendor who carves wooden figurines of Hasidic Jews with gaunt faces; young people who gather every Friday for Shabbat (Jewish Sabbath dinner) but also attend Catholic Mass on Sunday.”

Lehrer also writes of deeper, more resonant representations, but the overwhelming historical disconnect underpinning all of this cultural reaching and overreaching is undeniable. The pre-World War II Jewish experience in Poland isn’t just something that slipped away over time because Polish Jews embraced modernity, migrated, or assimilated, of course; as in most of central and eastern Europe, Jewish life disappeared because its residents were systematically wiped out. Real, uninterrupted Jewish cultural persistence from pre-war Poland is a practical impossibility.

But what if there were a shtetl hidden deep in the Polish forests that survived, undiscovered by Nazis, and untouched by the last 80 or more years of European history? And what might happen if that antediluvian Jewish village suddenly resurfaced in 21st century Poland?

The Lost Shtetl begins in the Jewish village of Kreskol, deep in the forests of Poland and apparently deep in the Jewish past, with an old world tale of an arranged marriage gone horribly wrong, and characters who might not have seemed terribly out of place in the stories of Isaac Bashevis Singer or in Bernard Malamud’s The Fixer.

The independent streak that impels Pesha Lindauer to leave her abusive husband and insist on her right to a better life represents a turn toward modern thinking, but without the influence of media or cultural shifts coming from the confines of isolated Kreskol. The divorce effectively breaks the seal on the community, as Pesha leaves not just her husband, but Kreskol itself. Her jilted husband Ishmael takes off in pursuit of his wife, and the village rabbis then send out an orphaned young Yeshiva student named Yankel to the Polish city of Smolskie to track down the Lindauers and bring them home.

The confused and transformative (personally and civically) cultural encounter that ensues centers largely on Yankel and drives most of the book. After he arrives in Smolskie and, to his great surprise, discovers that 21st century Smolskie has no Jewish Quarter, he falls into the hands of psychiatrists who commit him to a hospital and proceed to poke and prod at his brain in the hope of finding some explanation for the bizarre and inconceivable story he’s told them (through a gentile Yiddish interpreter) of an old Jewish village intact and secluded in the forest.

When he finally convinces them to accompany him home via helicopter, modern Poland meets lost shtetl, and the meshugas mounts, as the Smolskie Poles attempt to bring the Kreskol rabbis up to date on a century of history, reporters and tourists begin to descend on Kreskol, and the town reluctantly takes up the complex negotiations of its legal absorption into the Polish state. The exchange of Kreskol’s defunct currency for modern Polish money proves particularly contentious and portentous of uglier changes to come.

Gross handles this encounter astutely and humorously at nearly every turn. Particularly fascinating in the early conversations is how Smolskie’s bureaucratic emissaries/de facto cultural liaisons—all gentiles, of course—explain in broad strokes the vast historical changes the Kreskolites missed. “The fundamentals of the last century were recounted: World War II; the Cold War; the creation of the state of Israel; the collapse of the Soviet empire; a man on the moon; the eradication of polio; the instant coffee powder (even if normal coffee was an unfamiliar commodity in these parts).”

In this condensed version of Polish history, focusing particularly on the 1930s to the late 1980s, Gross’s narrator explains, the Kreskol villagers learned of the Nazi occupation, and of how “Poland was almost entirely cleansed of Jews.”

Then he notes, as the Smolskie envoy’s historical narrative advances to the post-war era, “The gentile was somewhat more animated talking about the Bolshevik calamity than the German one. He told us how the Bolsheviks had taken over the chess clubs and local sports clubs, how they printed phony propaganda sheets dressed up as newspapers, and how even after neutering their political rivals they still had to steal elections rather than win them honestly. And I supposed that if anyone had a clue as to what a Bolshevik looked like—or what the term meant—we would have run screaming at their very mention.”

The Lost Shtetl’s funniest and saddest episodes concern Yankel’s misadventures in modern-day Poland, and his hapless pursuit of Pesha Lindauer through a 21st century world that is foreign and mostly unfriendly to both of them. Yankel emerges as The Lost Shtetl’s tragicomic hero, and Gross captures his travels in the new world and his partial assimilation into it with estimable grace and humor and a strikingly perceptive sense of how such an encounter would go.

Gross also renders the other side of this culture clash with great acuity, intuiting how stumbling upon a thriving remnant of the decimated pre-war Jewry might strike contemporary Poles, particularly as suspicions of Kreskol’s authenticity and motives for presenting itself as a true lost shtetl come into question, and bring Jewish-Polish relations back to a familiar, if nearly forgotten boiling point. After all, given the painful, violent, and repressive history of Jewish shtetl life in often hostile European countries, the Jewish past is a lot easier to sentimentalize when it stays in the past and in the Pale.

“Ever since World War II ended nearly every Pole expected to one day hear a knock on the door with an ancient Jew on the doorstep brandishing a deed to the property,” Gross writes. “Or, if not a deed, the tormented memory of what had happened to them and their home—and whether this came with or without documentation was beside the point. It drove millions of Poles to apoplexy. However, the idea that the Jews would come into their windfall not by coming right out and demanding a specific plot of land or specific sum of money, but would take advantage of the Polish government’s guilt to cheat the country out of millions in tax benefits by forming a fake village . . . Well, that was too unlikely to be believed, until it appeared to be happening before their eyes!”

Such a collision is indeed stupefying to consider in its tragically absurd impossibility, and in Gross’ able and lively telling, it makes for wildly provocative, comical, and absorbing reading.