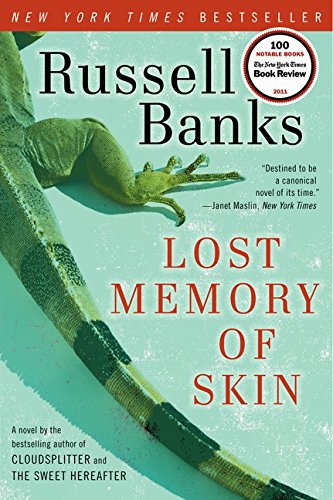 “When Mr. Banks is on a roll . . . it’s a pleasure to go along for the ride. . . . this is a rewarding novel, full of vigorous prose, grappling with the American experience.”

In Lost Memory of Skin, Russell Banks serves up a spirited defense of literary naturalism. In some respects this is not a fashionable book, but its very willfulness is part of its appeal.

Set in Florida, the novel tells the story of a convicted sex offender called the Kid. The Kid’s probation requires him to wear a GPS monitor and forbids him to live or work within 2500 feet of children. This effectively banishes him from normal society and obliges him to live in a makeshift camp under a causeway with other convicted sex offenders. It’s not exactly a promising environment for rehabilitation.

Enter the Professor, a grotesquely obese sociologist from the local university who wants to interview the Kid for research purposes. The Professor befriends the Kid and soon emerges as a complicated specimen himself, because he is a man with a secret past. Late in the story, another character, known only as the Writer, steps forward to help the Kid sort out the truth.

The Kid, the Professor, the Writer—if these characters sound schematic, well, sometimes they are. The Professor in particular: part Tom Ripley, part Noam Chomsky, part Santa Claus—he is an intriguing construct, but not altogether believable.

That said, author Banks’ real subject is not individuals as much as society, notably the society which makes a character like the Professor at least conceivable and the plight of the Kid a symptom of a larger American problem. Lost Memory of Skin entertains provocative ideas: for instance, that pedophilia is increasing in the postindustrial era and that it is due to the ascendance of American consumerist culture.

Although this interpretation of human sexuality doesn’t convince me (more about that later), Mr. Banks does an entertaining job of spinning a tale around the premise. Anecdotes about the Kid and his pet iguana roll out with poignant immediacy, as do descriptions of the Professor’s lonely childhood. The hand of a highly skilled storyteller is very much in evidence.

This is partly an achievement of style. In Lost Memory of Skin, Mr. Banks enjoys long sentences that create their own momentum, unfurling in great swoops. For reasons of my own, I read this novel aloud—a stern test for any book, since it becomes impossible for the eye to skip ahead or skim, each word must carry its own weight, and an author’s signature rhythm (or lack thereof) is revealed.

This novel stood up to that test very well. Consider the passage below, in which the Kid talks about his future of being on the registry of sex offenders:

“I’ll still be homeless and living under the Causeway or someplace like it that’s more than twenty-five hundred feet from wherever there are kids gathered or else I’ll be living in some wilderness where there’s only animals for neighbors, like I’m an animal myself, one of those pet store pythons that people get tired of feeding mice to so they drive out to the Panzacola Swamp and leave them by the side of the road and drive off while the python slithers down from the road into a culvert or under a causeway or an overpass and makes his home there for a while.”

A sentence of more than 100 words, with only two commas. Mr. Banks rejects the contemporary fashion for taut, clipped prose, which can sometimes feel uptight, even asphyxiating. Instead, his narrator and characters often hold forth in the great gusts. When Mr. Banks is on a roll, this works wonderfully, and it’s a pleasure to go along for the ride.

Occasionally, though, the style subsumes the subject and begins to feel like a writer on automatic pilot. Mr. Banks likes enumeration, Whitmanian lists—even negative hypothetical lists telling the reader what is not present in a given setting. The extended descriptions of storms and hurricanes, while obviously important to a naturalistic novel like this one (of course the sex offenders’ encampment gets wiped out, even as the eye of the hurricane mirrors the Professor’s predicament), will test some readers’ patience.

The question of sex is also problematic—perhaps inevitably. Though a convicted sex offender, the Kid is more hapless than threatening. His run-in with the law is to a large degree a misunderstanding. Mr. Banks underlines how preposterous and hysterical the treatment of sex offenders can be, and how the question is exploited by politicians and the media.

But is this plausible? Consumerism and Internet technology can surely facilitate and amplify the problem, but the problem, unfortunately, is neither so new, nor so local. Linking pedophilia to American consumerism might seem like a radical critique, but it could very well be an inverted example of American exceptionalism. (We are so special! Even in our awfulness.) But it’s not that simple.

Of course, the Professor’s views are not necessarily Mr. Banks’, and the later arrival of the Writer does, indeed, complicate the picture. The Writer superficially resembles Russell Banks, and gives the novel a metafictional jolt. (An earlier cameo by O. J. Simpson prepares the story for real-life intrusions.) But soon other details crop up that suggest that the Writer is not Banks. (Assuming we can believe what the Writer tells the Kid—it becomes that kind of game.) When the Kid observes near the end, “This ain’t a novel or a movie, y’know,” it creaks with contrivance.

Still, this is a rewarding novel, full of vigorous prose and grappling with the American experience. The final pages contain a remarkable description of the Kid charging the battery of his GPS ankle bracelet and visualizing, like some latter-day Henry Adams, the electrical turbines spinning. Only, in his case, he fantasizes himself not as the recipient of the current, but as the source. “He and millions like him were spinning the turbines at the farthest end of the line and not vice-versa.”

Such energy—and at what human cost? This is Mr. Banks’ story.