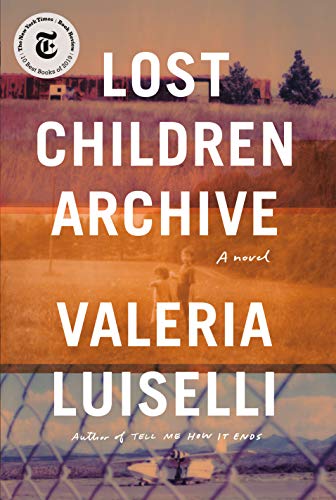 “The novel may be cool as it opens, but the ending is white hot. Both the unnamed family and the anonymous migrant children succeed as individual characters. Family and migrant voices ultimately combine to tell a collective story both specific and universal.”

Valeria Luiselli won the National Book Award in 2017 for her nonfiction work on Central American migrants, Tell Me How It Ends: An Essay in Forty Questions. Now in Lost Children Archive she explores the plight of unaccompanied Central American child migrants.

Employing the focus and magnification fiction provides, she imagines individual experiences behind headlines and soundbites. She approaches like a hovering drone, drops in for zoom focus on her representative characters; pulls up into literary, historical, and political context; and includes photographs as well as integral allusions to related fiction, poetry, philosophy, and history.

The novel presents resonant narratives of separation and loss within the framing travelogue device of a Brooklyn family’s cross-country trip. The members of this blended family are unnamed—anonymous, like media’s migrants. Embedded in the family narrative is the parallel story of seven young Central American migrant children traveling north with a coyote, told in haunting third person child voice through excerpts from a book the mother reads aloud.

Voice, echo, and silence serve as embracing thematic motifs. Collective voices brought the couple together; they met as colleagues recording voices to document multicultural urban life through soundscape. Each brought a young child to their marriage. Now, several years later, the couple verges on separation.

The family’s trip from Brooklyn to Arizona will be their ultimate family road trip, as the parents know, and the ten-year-old boy and six-year-old girl intuit. Driving across country, the father is preoccupied by his study of the vanished Apaches; the mother by concern for the unaccompanied minor migrant children of headlines and two specific missing children, daughters of her immigrant acquaintance. The boy in the back seat listens to the parents, absorbs the news of the coming end of his world, and documents the family and the bleak scenery with his Polaroid camera.

The mother narrates the first portion of the novel, initially in a somewhat intellectualized and distant voice. Her tone reflects her effort to hold together in the face of family disintegration, anger over unaccompanied migrant children, and fear for her friend’s daughters. Her restraint and denial break; her voice heats up, after witnessing children deported at a border airport. “From some dark depth I didn’t know was in me, a rage is unleased—sudden, volcanic, and untamable. I kick the mesh fence with all my strength, scream, kick again, throw my body against it, hurl insults at the officers.” Tension continues to build throughout her narration, as the intensity of the family and migrant situation increases.

The boy’s first-person voice concludes the book, recounting his family’s story in a tape-recorded message as an intentional time capsule for the girl he considers his sister, an explanation of the story she will be too young to remember in their anticipated separate future.

“Once upon a time, every morning, we also walked to school with our parents, and they went to work, but they always picked us up later…That was the time we were together even when we were not, because that was the time we all lived inside the same map. We stopped living in that map when we left on the road trip, and even though inside the car we were sitting so close together all the time, it felt like we were the opposite of being together.”

The novel may be cool as it opens, but the ending is white hot. Both the unnamed family and the anonymous migrant children succeed as individual characters. Family and migrant voices ultimately combine to tell a collective story both specific and universal.

Valeria Luiselli raises hard questions in Lost Children Archive regarding the responsibilities of writers of all disciplines and producers of media—particularly the ethical dilemmas of incorporating or appropriating real stories in fiction. Like Jennifer Clemente’s stunning novel Prayers for the Stolen about young female victims of Mexican drug cartels, Luisielli’s novel provides convincing evidence for the valid albeit complicated role of fiction in telling painful stories that must be heard.

Ellen Prentiss Campbell’s Known By Heart: Collected Stories, appeared May 1, 2020. Her debut novel, The Bowl with Gold Seams received the Indy Excellence Award for Historical Fiction; Contents Under Pressure: Collected Stories was nominated for The National Book Award. An essayist and reviewer for numerous journals, Campbell is at work on a novel.