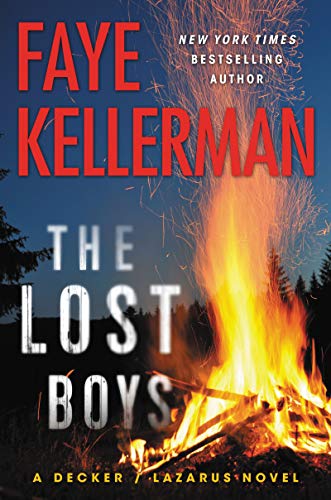 “Kellerman’s writing frames deep tenderness among her characters very well. The dropped plot threads can be irritating, but series readers will have faith that there’s a point to some of them, and that next year’s title will build on this year’s hints.”

The Lost Boys is the 26th in Faye Kellerman’s Decker/Lazarus series, and a warm and dense novel of investigative support, people who care about each other, and a good marriage—but also the tragedies that can erupt from well-meant friendships and small adventures.

Series readers will be able to slipstream along with the main characters, upstate New York detective Peter Decker and his wife Rina. New to the series? It helps to know that the name “Lazarus” on the cover and in the series title refers to the last name of Decker’s wife before she married him—and the teasing nickname “rabbi” that  Decker’s much younger investigative partner Tyler McAdams uses for him reflects Decker’s religious practice; he’s not a rabbi, but with his wife, he practices the traditions and food customs of observant Jews. All of which has little to do with the plot but will help in following the narrative.

It will also be helpful to drop the customary attentiveness of mystery readers determined to solve the crime just before the detective gets there. The book’s early chapters in particular are full of mild errors in the text (people start in one direction, then go in another; someone is invited for one meal that gets skipped and you’re in the next day). Paying too close attention will be frustrating. Just go with the flow, and with Decker and McCabe, who’ll traipse through woods and across the north country, trying to catch up with a pair of missing persons and, at the same time, three more missing ones from a decade earlier.

Kellerman’s plot takes a really interesting idea and plays it into intriguing characters: If people are emancipated adults but have learning disabilities, what happens when they leave their assisted living locales? Should they be considered “missing” in the sense of police interest, or are they entitled to make their own life choices?

Decker’s team first hunts for Bertram Lanz, a “developmentally disabled” man who has either walked away from a field trip or been kidnapped. Since his parents are very wealthy, kidnapping has to be on the table. Yet the parents mysteriously won’t return phone calls. When Lanz’s sweetheart also vanishes, plus a facility staff member who’d been close to Bertam, doubts about chasing after the missing adults cascade.

The young lady’s parents raise the first serious questions about this:

“‘She seemed to be doing better lately.’ He turned to his wife. ‘Am I right about that?’

‘Yes, I thought so.’ Alison looked up at the ceiling. ‘Maybe she was happy because she was planning her escape.’”

Similar questions arise in terms of three missing college students who vanished a decade earlier. Decker and McCabe enter the case, which began well before their time on the local police force, because a body turns up that appears to be one of the trio.

Turning around the scant facts on hand, along with more sets of uncommunicative parents of missing “adults,” the detectives start wondering what roles sex and drugs might have played in the distant past.

The third thread of suspense rises from concern over Peter and Rina’s foster son Gabe, whose disturbed birth mother has surfaced, along with a successfully criminal father and a man in India who could both pose threats to Gabe’s mother and thus to Gabe. Or at least to his heart. Again, what are the right choices in terms of the struggles of an adult who needs support but not a takeover? Which boys are lost, and which are just seeking independence?

Kellerman’s writing frames deep tenderness among her characters very well. The dropped plot threads can be irritating, but series readers will have faith that there’s a point to some of them, and that next year’s title will build on this year’s hints.