The Lost Apothecary: A Novel 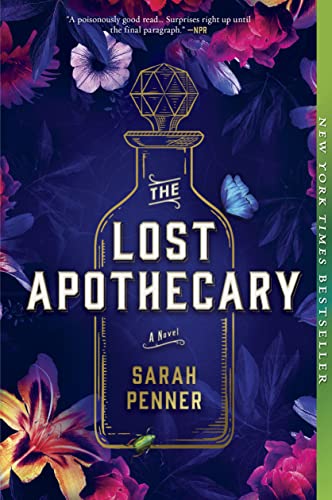 There has been a lot of advance promotion for this debut novel, the kind that could make one wary. In this case, however, the lavish praise is completely deserved. Sarah Penner has written a page-turner, bringing the reader immediately into both of her parallel worlds. The two stories, one past, one present, intertwine ingeniously, resonating off each other in unexpected ways.

The book opens with a strong first sentence, the kind that immediately makes one wonder what happens next:

Who is the woman? What does the letter say? And why does she write to someone she doesn’t even know? The questions pile up and like any good writer, Penner knows how to draw out the answer. Along the way, she brings us into the shop of a London apothecary in 1791. Nella isn’t an ordinary apothecary, however. She doesn’t mix up herbal remedies for various ailments. Or rather she does, but only as a sideline. Her main business is murder.

Mixing up different kinds of poisons, Nella is on a mission to help women in need and pain, women who have been betrayed or threatened by men. Her motives aren’t revealed at first, but glimpses are given until her story is fully explained in a conversation with Eliza, the young servant girl whose voice also threads through the story.

Chapters alternate between Nella’s and Eliza’s points of view, both from 1791, and Caroline’s voice, a contemporary woman who has also been betrayed by a man. Caroline has come to London to celebrate her 10th wedding anniversary, only instead of enjoying the romantic holiday she’d planned, she’s escaping the recent news of her husband’s affair.

Once in London, the time alone reminds Caroline of what really matters to her, the interests she set aside when she married her practical husband, James:

“A decade ago, in college, I’d graduated with a degree in British history. I’d passed my coursework with decent grades, but I’d always been most interested in what lay outside the textbooks. The dry, formulaic chapters simply didn’t interest me as much as the musty, antiquated albums stored in the archives of old buildings, or the digitized images of faded ephemera—playbills, census records, passenger manifest lists—I found online.”

When Caroline fortuitously finds just such a musty object, a small glass vial, in the mud along the Thames River, she begins the kind of historical research she’d loved as young woman. She tracks down the vial to an apothecary, the “lost” apothecary of the book’s title.

“Surrounded by London’s weathered brick buildings, mysterious artifacts and obsolete maps, I’d been reminded why, so long ago, I found myself enamored of British literature and history’s obscurities. The youthful, adventurous student in me had begun to resurface. Like the vial, I’d dug out of the mud, I had begun to unbury something dormant inside of myself.”

The reader knows more than Caroline does, as both Nella and Eliza share the stories of the desperate women who come to the apothecary’s shop. The plot takes many twists and turns, each short chapter ending with its own small cliffhanger, pushing the reader to find out what happens next. As the parallels between the three women deepen, the past and present blur together, until the final page when they all come together in a cleverly perfect (or perfectly clever) ending.

Such a promising debut makes one wonder what Penner’s next book will be about. She’s sure to have many fans eager to read it.