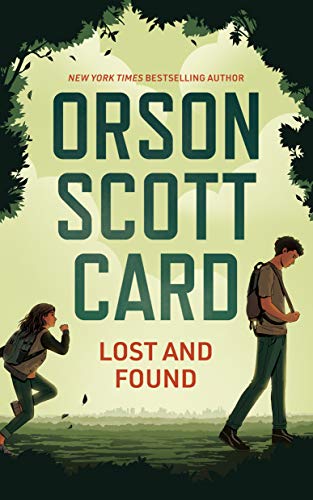 When you read a few hundred novels a year, you learn to tell from page one who’s got the storyteller gene. Or at least the storycrafter skill.

Orson Scott Card has both, and here in his latest novel he lets ’em roll.

From opening sentence, readers are pulled into character, conflict, place—and an interesting situation.

Fourteen-year-old Ezekiel has a problem like no other person. Well, perhaps he’s like more people than he or we ever think about, which might be the point.

Ezekiel has a unique “micropower”: the ability to find things and know where they came from. Things as trivial as hair scrunchies lying on the pavement, or stolen bicycles.

When, in his naïveté, he tried to return the lost things to their owners, he was unjustly accused of stealing those things in the first place because nobody could understand how he knew what he knew, and was unwilling to believe him.

He thus developed an understandable aversion to telling people about his ability, and instead of cultivating it he chose to hide it as much as possible.

Lucky for him, two important people believe in him: his father and his unexpected best friend, Beth, who suffers her own shunning because she’s a dwarf. That is, she’s a proportionate dwarf, a miniature person, which makes her look years younger than her actual age.

Both kids are extremely intelligent but bullied by others because of their differences from the norm. This gives them common ground upon which to build friendship and, eventually, something more.

However, much occurs before that “something” can manifest. Beth has her own micropower, the ability to make people open up and talk to her despite their inhibitions. Together she and Ezekiel attend a not-really-therapy group of teens who have odd micropowers. One of them can make people yawn, another always knows where spiders are, and specialties of that ilk. Their common goal is to figure out how to harness their micropower for their own and other people’s good, rather than cower in shame or fear because of their weirdness.

The story zips along mainly through sharp and snappy dialogue, often surprising for kids of that age. Also surprising between parent and child. But Ezekiel’s dad is a background driving force of the novel. He’s the only parent involved, because the mom got struck dead by a car right under Ezekiel’s nose—a trauma both father and son still struggle to live with—and also because Beth’s parents have their own tragic story that keeps them out of sight.

So these two fractured families are left adrift, struggling to cope, and need to learn from unconventional sources how to find comfort, salvation, and the support to carry on—at the same time mastering their micropowers to help other people.

The challenge of this is multiplied by bad things happening around them. Young girls have gone missing, and Ezekiel is drawn into their cases by a policeman who learns about his talent and pushes him to develop it to help the lost be found.

Ezekiel resists at first, but a surprise success turns his resistance into interest and hope. It kicks into high gear when Beth—mistaken for a younger girl because of her size—goes missing. Now Ezekiel has powerful, personal motivation to pull his pieces and parts together and do something life-or-death important.

And herein lies the value of this story. On the surface, it’s a young adult coming-of-age mystery with powerful plot compulsion that makes it entertaining reading. Underneath, there’s a lot of important moral and character-crisis material that leaves a sense of  “wow” and “but of course,” "emotionally gratifying whether you’re 14 or 40 or 74."

The ability to combine these elements is Orson Scott Card’s specialty. The various awards he’s won are well deserved. He has nailed the high-IQ, exceptional-individual-in-a-strange-but-wonderful-world story across genres. Lost and Found is a contemporary YA version of this model.

Established fans will find this to be as rewarding as his previous books. Happily, he’s written lots and lots of them, all just as good, which give new readers a vast body of work to explore. And perhaps a means to discover their own unique micropower . . .