Lost in America: A Dead-End Journey 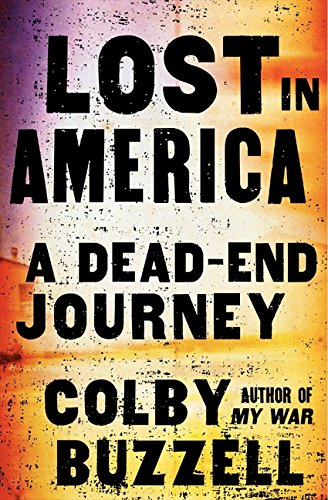 “In snippets, we are offered hints of what could have been a fine book. . . . But alas, no go. . . . For all his booze-soaked pseudo attitude . . . Mr. Buzzell is indeed lost, but he is lost in a misguided concept, rather than in a country as the title suggests.”

Roughly halfway through Lost in America, author Colby Buzzell considers whether his book ought to be abandoned. “My thoughts were drunk, and either I could jump on this train and run away forever and abandon everything—this book, the life I had, and all my worldly possessions, all of it . . .”

While abandoning it all might be a tad overreactive, giving this book some deeper consideration would no doubt have been fruitful. This not because Mr. Buzzell is a poor writer nor that the concept in itself is weak; it’s just that the author and the publisher have conspired to take aim—and miss the mark. Early on, the author fesses up that this book is a publisher’s idea to gain some further commercial mileage out of Mr. Buzzell’s first book, the seemingly well-received My War. This somewhat disingenuous basis for a book looms like a shadow over all that follows and may well have thrown Mr. Buzzell into something of a thematic hole as he undertook his journey across America without perhaps the fire of inspiration that fueled the first book.

It is clear that Mr. Buzzell has fallen into acting out a part cast upon him: as that of a latter-day Jack Kerouac. This is mentioned more than once by Mr Buzzell himself. But the very artistic freshness, literary revolution, and spontaneity of Mr Kerouac’s seminal work is strangled here by the attempt to cook up a semi-picaresque tale that essentially spirals out of control.

Mr. Buzzell comes across in a lot of the book as a narcissistic, heavy smoking, self-confessed problem drinker, projecting a character that is bordering on annoying, not to mention clichéd.

The overarching impression is that of a writer who hasn’t found his voice and is experimenting with another persona in lieu of developing a stronger literary self.

There are only mere paragraphs scattered here and there in the book that hint at Mr Buzzell’s underlying and, in this book at least, untapped potential.

For instance, in a section where he is stalking the house in Detroit made famous by TIME magazine as a slice of real America, Mr. Buzzell offers a disarming and brutally honest self-portrait of an artist and his ego. He toys with the idea of writing for TIME, of being offered big money for his work, only to flay himself for his pretensions and for his jealousy of those, such as TIME’s vaunted talents, whom he clearly admires.

It’s a moment in which any creative thinker will feel the pull of recognition: of the desire to be lauded while trying hard to maintain one’s artistic integrity.

It appears Mr. Buzzell has firmly forsaken the cushy charms of TIME in favor of living the hard life among the downtrodden, à la Orwell’s Down and Out in Paris and London. Yet unlike in Orwell’s opus or in Graham Greene’s Travels with Charley (to which the publicity material compares Lost in America) the character sketches in Lost in America do not elicit warmth or even interest, and thus these figures from American society’s ever-widening margins lie flat on the page.

Alcohol and drugs of various forms pepper the space in which the author and his players operate, and the reader is left to question whether these are really society’s victims, as Mr. Buzzell seems keen to suggest, or just ordinary folk who have made some very poor choices and have now forgotten how to make decisions at all.

As character study of a nation at a crucial time in its history, Lost in America is itself struggling to find direction. Any sense of plot is undermined by the desire to overcook the grim and desperate tableaux Mr. Buzzell creates, while any insight is buried beneath the book’s central flaws.

In snippets, we are offered hints of what could have been a fine book. Mr Buzzell’s background—he is an Iraq War vet with a Korean mother and a Vietnam vet father—offers the possibility of exploring a more familial narrative incorporating the journeys of three Americans—all victims of different American wars—and perhaps how they faced the suggested ensuing miseries. But alas, no go.

For example, when Mr. Buzzell writes about the early passages of his mother’s journey into illness and into America’s much headlined and much criticized healthcare system, he ignores a useful hook on which to hang a book of this nature.

For all his booze-soaked pseudo attitude—as if an artist worth the title must remain a drunkard—Mr. Buzzell is indeed lost, but he is lost in a misguided concept, rather than in a country as the title suggests.

Moments of redemption—Mr. Buzzell’s admission that he has a drinking problem and the closing words in this disappointing work—offer hope that Mr. Buzzell, both as a person and as a writer, will emerge with added grace.

In the final passage, Mr. Buzzell is heading home after ambling his way around the country and comments, “The airline stewardess came around and asked me whether I’d like a drink. I thought about it and told her no. “I’m fine thank you.’ And I smiled.”

If only Mr. Buzzell had exercised such force of will in shaping the direction of this book and in the choices he made in its construction, Lost in America might not say more about the book than is intended.