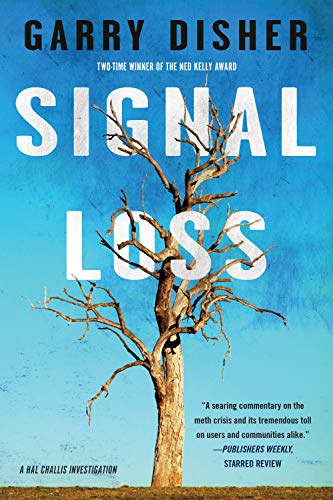 Nine chapters into a crime novel by an author you might not have heard of before, a guy is driving home in the early morning from his job at a gas station out on the highway. All of a sudden he hits a kangaroo. It flips up over the hood, stars his windshield, bangs over the roof, and catapults into the ditch. The impact sends him off the road and into a tree.

Soho Crime, whose mandate is to publish “atmospheric crime fiction set all over the world,” remains true to form with the publication of Signal Loss by Garry Disher. His seventh offering in the Hal Challis series, this police procedural is set in the Mornington Peninsula region of Australia, southeast of Melbourne. Hence the roo.

The story tracks two interweaving investigations. One, led by protagonist Hal Challis, follows a small bush fire and a burned-out Mercedes with two bodies inside (three, if you count the dog) into an ongoing case focusing on local meth production. In the other, Sergeant Ellen Destry and her sex crimes unit pursue a quirky serial rapist who’s very careful not to leave any clues behind.

Disher tells a good story. His early coverage of the two hit men in the Mercedes is reminiscent of Elmore Leonard, which is not a bad thing. He interweaves the threads of both investigations carefully, and it’s not difficult to keep the storylines straight. His prose is simple and easy to read, and local idioms and usage never disrupt the flow for a wider reading audience outside Australia.

There are a few blips along the way. In the fourth chapter, for example, we follow Constable Pam Murphy to the upstairs briefing room where we’re forced to attend a very long seminar on local ice production organized by the annoying, sexy, and aggressive Senior Sergeant Serena Coolidge of the Major Drug Investigation Division. It’s understood that Disher’s using this session as a device to provide the reader with information about the very serious drug problem plaguing the region, but it goes on and on and on and on, to the point that you want to put in for overtime pay for attending training on your day off.

Disher’s secondary characters, on the other hand, are really quite good. Murphy’s rather sad, but when she begins an intimate relationship with witness Michael Traill (the guy who hit the kangaroo) in a bid to break out of her funk, the combination promises to be very interesting, indeed.

Furthermore, the fact that Challis and Destry are romantically involved is not a problem at all. Disher handles their relationship in Signal Loss deftly and without dragging us through an emotional or sexual swamp. In fact, at one point we find them sharing breakfast on Challis’s deck, “the sun slanting through the trees along the back fence.” Destry asks a question that Challis doesn’t answer, and Disher gives us this lovely little passage:

“She got a distracted smile for her pains, Challis’s finely shaped head bent over yesterday’s cryptic crossword. His hair, mainly dark, streaked with grey, was shaggy, beginning to curl. It needed cutting. His face was thinner, with new smile and tension lines at his mouth. Sometimes she just wanted to watch him for a while.”

Slipped in like this, in the middle of a police procedural by an author of more than 40 books who is referred to by Soho as “the godfather of Australian noir,” it’s proof that Garry Disher can write. And write well.

While cellphone communication can be an ongoing challenge in the Peninsula, particularly after you hit a kangaroo and try to call for roadside assistance, Signal Loss comes through loud and clear as a crime novel that will send us back to Garry Disher’s Australia for more. Challis and Destry are excellent characters, Disher’s story is very well told, and the setting appeals to our taste for something different.