Losing Mum and Pup: A Memoir 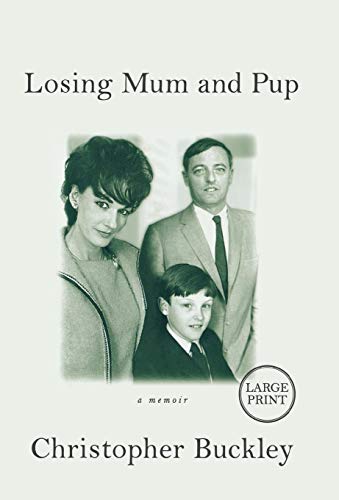 According to his only child, Christopher, William F. Buckley, Jr., often said, “Industry is the enemy of melancholy.” Accordingly, Christopher Buckley has written this memoir—literally a book of memories—about his parents’ final years as a way of dealing with his loss and sense of disorientation.

We all, of course, knew about his father, the late conservative icon often symbolized by the initials WFB. WFB wrote 5,600 newspaper columns between the years 1962 and 2008; hosted “Frontline” for 33 years; and had completed 56 books as of the time of his death. Patricia Taylor Buckley, WFB’s wife, is someone we knew little of, but she comes to life in her son’s telling as a regal and charming—if occasionally impatient—woman.

What is very clear about the Buckleys is that they were, indeed, larger-than-life figures. When Patricia one day received a call intended for WFB and was told the president was on the line she responded, “The president of what?” Of a female politician she said, “That woman is so stupid she ought to be caged!”

While we may think we knew WFB, this book provides a few new views and perspectives. It was clear that the author of God and Man at Yale was an intellectual (a man who could dictate using perfect punctuation), but not many of us suspected that he was a daring sailor and pilot whose near-death escapades make for lively reading. As summed up by Chris, “Pup was the bravest man I knew.”

Well, but then politics is a dangerous sport. Christopher, who supported Barack Obama, has the great sense to touch lightly on conservative versus liberal in this memoir. Christopher does show us that WFB was both a prideful man and a man of fine humor. When asked, back in 1965, what he would do if elected mayor of New York City, WFB answered, “Demand a recount!”

WFB was to say that “Despair is a mortal sin;” and also that, “I believe in neither permanent victories nor permanent defeats.” Perhaps this is why his son crafted this book of memories so that it celebrates the lives of his parents—despite some personal faults that he clearly divulges —rather than the defeat he felt from their passing within a year of each other.

“Christo,” as he was known to WFB, was able directly to tell his father, “I love you very much.” This despite the fact that WFB could be a harsh critic of his son’s work, including sending this e-mail message just after receiving his son’s latest book: “This one doesn’t work for me sorry.”

There’s little cause to doubt that Losing Mum and Pup would have worked for both WFB and Patricia Taylor Buckley. While, in the words of a traditional American folk song, “Death don’t have no mercy in this land . . . ,” this is a life-affirming work.