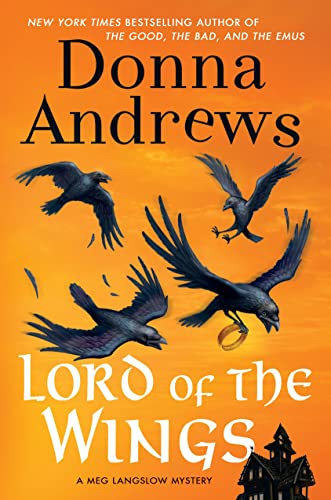 “light in spirit and tone, and abundant in levity.”

Only Donna Andrews can set a mystery in a townwide Halloween festival and make it feel like a normal day in a normal life.

That’s because what’s normal to her heroine Meg Langslow is delightfully absurd to the rest of us. Meg, a blacksmith by trade but a super-organizer thanks to situations she keeps getting drawn into, is once again managing one of Caerphilly, Virginia’s civic events.

This time she’s behind the scenes. Since the previous volume in this 19-book series, her perpetual-volunteer position has turned into a paying job. But she declines it, grateful to have time to spend with her family and career.

After handing over the reins to the new Special Assistant to the Mayor—who makes hash of the job—the woman disappears. That forces Meg to take up the slack. It overburdens the duty she did volunteer for: overseeing the “Goblin Patrol” to help the town cops manage the tourist influx into Caerphilly (pronounced “care-PHILLY” we are reminded).

The festival is barely under way before a dead body is found at the Creatures of the Night exhibit at her grandfather’s zoo. At first the murder seems to be connected to a wacky scavenger hunt. Then maybe something to do with the macabre historical museum run by a guy who dresses in vampire costume all year long. Appropriately, he opens his done-all-in-black home for the festival’s Haunted House, along with his museum in the basement.

Meg needs to know in order to hold up her end of the responsibilities and protect her beloved town. At the same time she must keep her twin six-year-old sons in costume (everyone in town wears them full time for the festival—even the dogs and llamas) while organizing platoons of helpers to patrol the zoo, the museum, the Haunted House, the concert, the shopping district, all while coordinating with the police and controlling her chaotic household.

There’s so much going on that the reader has to be sharp-eyed to spot clues to the mystery. They are all sleight-of-hand in that they’re right in front of you but you’re so distracted by everything else that you look right past them.

What seems frivolous ultimately proves serious. In this case there’s a scary-movie feel to the climax (“No, no, girl—don’t go in there!”). But Meg and a feisty librarian prevail and solve the case.

A quality that separates these cozy mysteries from many of their ilk is Meg’s balance between being an amateur sleuth and official participant. “I’d done everything I could do to help the chief’s murder investigation. At least everything I could do without crossing that invisible line between helpful citizen and interfering busybody.” She stays on the right side of the line—just barely, sometimes—so there’s no stretching of credulity in her involvement. This frees readers to enjoy the puzzle and atmosphere of the story.

The combination makes for “light reading”—ordinarily a semi-insult, but in Lord of the Wings it means light in spirit and tone, and abundant in levity. Donna Andrews delivers her stories reliably in smooth and wry prose. Her many fans, upon closing this book, will be queuing up for the next one.