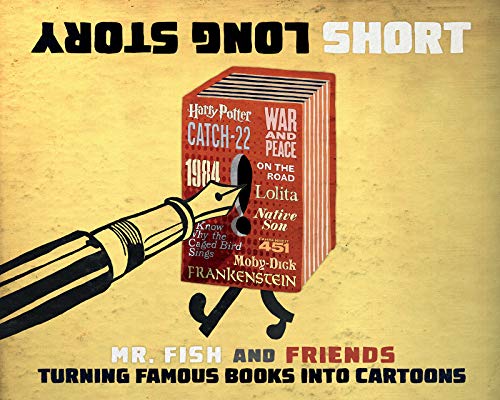 Virtually all children’s books are illustrated. It’s easy to understand why: images allow nearly instantaneous comprehension; they extend a story beyond its simple text; they attract and focus visual attention even before the concept of reading emerges. Adult books (graphic novels aside) are far less likely to be illustrated. It’s widely believed, at least in western culture, that text is “more serious” when it arrives without accompanying images. It’s a presumed intellectual achievement to “move beyond” pictures and become a silent, self-illustrating reader. (That, of course, is only one understanding of reading, and not really the dominant one globally. Still, the western canon and its culture carry a lot of weight.)

Mr. Fish’s introduction to Long Story Short confronts the idea that imageless text is the ultimate literary form: “The book you now hold in your hand represents a collective effort . . . to capture the meaning and essence—perhaps even to reveal the deeper truths previously neglected by the keenest of readers—of some of the world’s most famous books.”

It’s a tall order, underwritten by the certainty that “an image, whether snapped or rendered, does something that the written word cannot: it communicates a version of reality instantaneously, one that informs immediately without first needing to be assembled brick by syntactic brick, then cognitively deciphered and then paired up with the appropriate sense memory, moral contrivance, and rote definition before its meaning and intentions can be made clear.”

That circumlocution of a picture’s worth a thousand words is the most text-heavy part of the book. It’s perhaps too many words for such a simple concept, but it reflects the ethos of illustration over language. Beyond that two-page introduction, the book’s text shrinks to book titles and authors, each labelling the image that follows.

Why are those titles needed, though? If a single illustration could genuinely capture a novel, wouldn’t the labels be extraneous? Couldn’t they come later, or be provided as an appendix in the rear? If the book lived up to its promise, the labels could be dispensed with, but some thoughtful soul realized in time that it doesn’t. A picture may be worth a thousand words, but no single (or single page) illustration can capture the real nuances of the hundreds of pages that make up famous books, even those of dubious quality.

At their best, Long Story Short’s illustrations offer the nuance of a well-designed book cover. Mr. Fish’s rendering of Vladimir Nabokov’s Lolita isn’t quite wordless (her names repeat, line after line, in the corner), but the sequential images of an over-sharpened pencil destroying itself and then meeting another are deeply evocative. While this page isn’t by any means a full engagement of either Nabokov’s plot or his language, it offers a charming parallel commentary, or an engaging introduction.

Some other illustrations have comparable success. Wes Tyrell’s rendering of The Electric Kool-Aid Acid Test by Tom Wolfe is certainly recognizable. Tyrell combines the iconic images of Tom Wolfe (white suited, as always) and mid-’60s psychedelia with real humor. The caricature of Allan Ginsberg as a hairy, naked Buddha, the bikers, and the psychedelic bus add layers of period charm.

Surag Ramachandran transforms Charlie and the Chocolate Factory into a minimal modernist street-scene, one wildly colored but otherwise ordinary factory within a brutalist cityscape. Captioned, “The Radical Legacy of Hope,” this image provides an engaging, if largely extra-textual, commentary on the book.

But too often, the cartoons are just that: a quick joke with a sketch to match. Ted Rall’s version of Hawthorne’s The Scarlet Letter offers doodled 17th century people (one a woman with a child) facing a man who jokes, “Just you wait until Online slut-shaming!”

Stephen Hawking’s A Brief History of Time is awarded a literal hourglass, filled completely with sand. One studies it, trying to decide if there’s a joke here, and if there is, whether it’s clever. Likely not.

About half the total book is done by Mr. Fish; the rest is a collection of work by other artists. There’s no consistency in quality or coherence. Long Story Short feels like a challenge thrown out to a crowd, with the results assembled into a book and padded out to feel shelf-ready. At moments it’s cute, and at other points funny, but the promise of the introduction lives only in that introduction, an unrealized ambition which ironically reaffirms the value of the written language that it claims to undermine.