Long Players: Writers on the Albums that Shaped Them 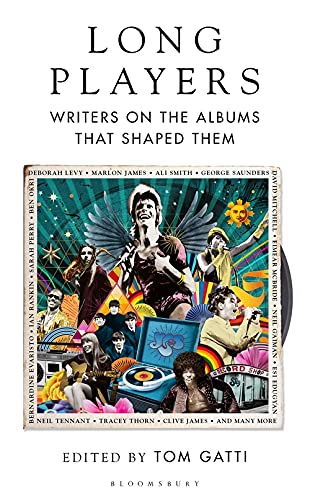 Britain’s Desert Island Discs has been on the BBC since 1942. They don’t have to choose records on that mythical patch of sand with a lone palm tree for company, but many do. Long Players focuses on writers, and it doesn’t give them a choice. It began as a column in The New Statesman, where editor Gatti works.

It’s British, which means that names like Pulp, Blur, Happy Mondays, Paul Weller and Oasis that barely translated over here loom large. And David Bowie, well, they think he walks on water. And it’s kind of literary. The contributors (some American) don’t talk so much about the albums as where they were and what they were doing when they heard them. All well and good.

Gatti provides a useful introduction to the various forms that recorded music has taken—from 78s to the MP3 file—but is it really true that listeners are tired of streaming platforms and are “returning to the album as an unbroken artwork: something with an emotional and sonic arc, to be played from start to finish without interruption”?

In point of fact, CDs are still the main medium for releasing physical product, but they’re become as reviled as the minivan in a sea of SUVs. Used, they’re almost worthless.

Deborah Levy’s essay (and these are essays) about David Bowie’s Rise and Fall of Ziggy Stardust and the Spiders from Mars is typical in that she found the album as a teenager. “Bowie’s voice was as hysterical as I felt,” Levy writes. “‘Rock and Roll Suicide’ suggested “I was not alone in my beautiful desolation.” In the U.S., this role is often played by Joni Mitchell’s Blue, now celebrating its 50th birthday. (David Mitchell goes on about that one—with its “pages torn from raw autobiography”—here.)

Patricia Lockwood’s take on This Mortal Coil’s It’ll End in Tears also has her dissolving in a puddle. She’s never been so completely the target audience for something, lying “motionless on the floor, gay, made of gauze, clutching myself against a background of dissolving stars.” But one can about “the hot.”

Marlon James heard Post by Bjork at a similar turning point, at 25, when he was asking himself, “What is life” and “Why am I here?” The Icelandic chanteuse delivered answers not to those questions, but to ones he didn’t ask.

Clive James’ focus on Duke Ellington’s 1956 Ellington at Newport is a refreshing departure because, well, it’s not about the album saving his life. Instead, he just writes about his early Ellington phase, while a student at Sydney University, and of being torn up by the extended version of “Diminuendo and Crescendo in Blue,” featuring tenor saxophonist Paul Gonsalves going on for 27 choruses. “Boy, did I love that,” he writes.

Also taken with jazz is John Harris, who took John Coltrane’s 1965 A Love Supreme out of the library for a 25p loan when he was 17. What he got for his money was “the most transcendent music I have ever heard.” Now, in his 50s, he still relates to it in the same way.

Billy Bragg should write more prose. His encomium to Ronnie Lane’s Slim Chance is exemplary. It’s also not so much about the album itself (though he’s right to call this solo work by an ex-Small Face “an English country music that was neither traditional nor pastoral”). Instead, Bragg writes about his time staying and recording with a member of Lane’s band. It’s a little miniature about a brief interlude that was like “walking into the sleeve of one of our favorite records.”

George Saunders is brave to cite Yes’ Fragile from 1971. “Progressive rock” groups like that were enormously popular in the 1970s but are kind of embarrassing now. “I could find no overt ‘meaning’ in Fragile—except for the intensity of the experience I had listening to it,” he writes. Saunders even admits he still likes it, and a recent listening revealed it to be “startling, brash, complex,” and “refusing to succumb to tropes.” Still “thrilling,” he says. If you say so, George. It’s much more fashionable to trash records like this because their pretensions, taken at length, paved the way for punk. Classically influenced “suites” were replaced by two minutes of dumbo rock.

It’s interesting that Bonnie Greer, an African American woman from the south side of Chicago, where the electric blues was born, doesn’t find Janis Joplin inauthentic. Instead, she played Big Brother and the Holding Company’s 1968 Cheap Thrills “five times in succession. On the fifth playing, I knew it was embedded.”

And then there’s Ian Rankin’s take on John Martyn’s Solid Air from 1973. Recently revealed to be a thoroughgoing rotter in Graeme Thomson’s biography, Small Hours, Martyn was nonetheless a brilliant and challenging musician. [[His folk-jazz was]] hardly the type of thing a British kid into Status Quo and Alex Harvey would like. But a pal played (Solid Air) for him. Repelled at first, “It grew on me. And kept growing.” Martyn’s gorgeous early music—so different from his life—will have that effect.