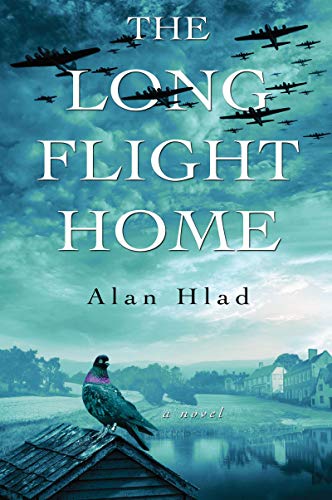 “A story of loss and heartbreak, sacrifice and compassion, The Long Flight Home is ultimately a story of hope.”

Ollie Evans, a second generation American living in Maine, and his father are at odds regarding American’s neutrality in World War II. As his father likes to remind Ollie, “Our family may have lost our accent . . . But our blood is, and always will be, British.” After a terrible accident, Ollie leaves the family farm to honor his father’s legacy by enlisting in the Royal Air Force.

A chance meeting with a flight recruiter propels Ollie onto a dangerous steamer journey across the Nazi infested North Atlantic. He arrives ready to make his way to the recruiter, but is waylaid by one of the nightly bombings of London and spends his first evening in a bomb shelter. As he watches the courage with which regular people face these onslaughts, he becomes even more resolved to help the war effort.

Meanwhile, Bertie Shepherd, a renowned breeder of homing pigeons and his granddaughter, Susan, have witnessed first-hand the destruction of London during the nightly Blitzkriegs launched by the Nazis from occupied France. Anxious to help put an end to the devastation they enlist in a secret mission entitled Source Columba. The mission’s aim is to drop homing pigeons all over France in hopes of getting them into the hands of the French Resistance. It is by this means that they plan to get intelligence on the location of German troops.

Susan, in the company of Flight Lieutenant Clyde Boar, heads to London in order to be briefed on the mission. But on the return trip when Lieutenant Boar harasses Susan upon a train, Ollie witnesses it and rushes to her aid.

Unfortunately, the aptly named Boar doesn’t take kindly to interference, especially interference from a “Yank.”  Boar has Ollie arrested, beaten, and thrown into the stockade. It is through the effort of Susan’s grandfather, Bertie, that Ollie is released. But this release is with the stipulation that Ollie will work with the Shepherds in getting the pigeons prepared for their mission.

As Ollie and Susan work together, they gradually fall in love. But love and war seldom mix and when Susan’s beloved pet, Duchess, is accidentally put onto an airplane headed for France, Ollie rushes in to retrieve the bird. Unfortunately, the plane leaves the ground before he can exit, and he finds himself stuck with his nemesis, Lieutenant Boar.

After the plane is shot down over France, the two men will have to work together in order to survive. But Lieutenant Boar does not possess a forgiving nature, and wartime love stories seldom have happy ends. And there are some flights home that take longer than others.

Author Alan Hlad does a remarkable job with his descriptions of pigeon behavior and the odds these birds faced in completing their mission. The facts that inspired this story make for fascinating reading and illustrate the lengths everyday citizens were willing to go to defeat evil.

At times the story veers too far into melodrama. From a potato farm’s foreclosure to a well-timed intervention from Winston Churchill, some of the pieces fall into place too easily and seem forced. Andthere are times when the characters fall into caricature—the feisty heroine, the down-home hero, and the dastardly villain behave in ways that seem to fit a role rather than a person.

In spite of these shortcomings, there are plenty of instances where Hlad’s writing shines. For instance, in his brilliant descriptions of the “keep calm” attitude of the Londoners and the devastation they were confronted with each morning when they left the bomb shelters, Hlad presents a clear picture of the bravery with which everyday citizens went about their business.

A story of loss and heartbreak, sacrifice and compassion, The Long Flight Home is ultimately a story of hope. An engrossing glimpse of World War II, it is a meticulously researched and satisfying novel about an all-but-forgotten wartime mission.