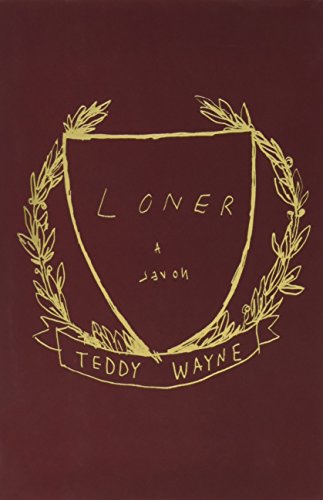 Back in March 2010, when Teddy Wayne took the podium at McNally Jackson bookstore to read from his debut novel Kapitoil, someone in the crowd leaned over and whispered, “He’s so smart—he went to Harvard.” And that’s one of the two assumptions people usually have when hearing “the H-bomb.” Harvard symbolizes smart. Gifted smart. (The other assumption, of course, being wealth.) But what’s the good of being gifted smart if you’re an idiot? Or an asshole? Or a rapist?

Wayne’s third novel Loner is set on Harvard’s Hogwarts-ish campus, and he brings the incoming freshman experience to life so well it’ll make you cringe. Many readers will naturally assume his 18-year-old protagonist David Federman is a thinly veiled autobiographical version of Wayne when he himself was at Harvard, but no. The best thing about Loner is that nothing is as it seems.

Harvard’s motto is Veritas. Truth. You see the word inscribed on the campus’s gates, carved into buildings, etched onto souvenirs. VE-RI-TAS. It’s everywhere. And yet nearly yet everything in Loner is a lie.

All across the Ivy Leagues, campuses have been roiling with outcry over mishandled sexual assault cases, racial prejudices, and gender politics. Freshmen conversations revolve around buzz phrases like “structural patriarchy,” “social justice,” and “phallogocentric register.” It’s into this contemporary controversial campus world, and not the relatively placid and sentimental late nineties of Wayne’s own college experience, that his David Federman enters.

White, male, cisgender, able, upper-middle class, and heterosexual, David is quite aware of his privilege. Though when he, a son of a lawyer, says he hasn’t had all the advantages, in comparison to some of Harvard’s elite students, his dorm mate Sara corrects him, “You have, hugely.”

David and nerdy, homely, prudish Sara start dating soon after classes begin, but by then he’s already fallen in love with Sara’s roommate, Veronica Morgan Wells. The novel is written in the second person as David’s letter to Veronica, after something life-changing seems to have happened between them. We’re not sure what that is until the end.

Veronica is a beautiful and sophisticated New Yorker, daughter of a wealthy father in finance, raised on Park Avenue, and effortlessly popular. Tasteful and stylish, she’s among the in-crowd wherever she goes, the dinning hall or a final club. David initially imagines her as having “traveled widely, dined at Michelin-starred restaurants without parental supervision, matriculated at schools with single-name national reputations, ingested designer drugs and maybe had a cushy stint in rehab.”

Our culture romanticizes mad love—when a poor soul is struck by Cupid’s poisoned arrow and becomes so infatuated with another they’re unable to sleep, eat, or think about anything else. It’s the tortured yet idealized emotional state hammered into our hearts by most movies, books, and songs. And so during the first week of class shopping, when David follows Veronica around and enrolls in courses simply because she’s taking them, it seems harmless, even cute. When he memorizes her bio in the Freshman Register and finds out everything he can about her on the Internet, we can still put it down to the typical symptoms of an 18 year old’s crush in the digital age. He’s simply in love.

As classes begin and autumn pushes summer away, David manages to be wherever Veronica is and strives to contrive the slightest interchange, anything that could pass as conversation. She often barely acknowledges him, clearly not interested, and other times she surprises him with a direct address, perhaps even a question. He finds immense encouragement when she does, building even grander castles in the sky of his clouded mind. Yes, it’s a little disconcerting that he dates Sara solely in order to be close to Veronica, but people have done much worse. Veronica has an older, cooler boyfriend anyway, and isn’t above using David herself.

He eventually arranges a study session together, during which she plays a ditz, and we wonder if the only way she made it into Harvard is by having other people write her papers. David doesn’t hesitate to fill this role, first advising and then ghost writing her essay while she reads for another class, imagining he’ll impress her with his staggering intelligence, and she’ll have no choice but to fall for him. If she does, then everything would be fine.

Despite being a liar and stalker having no integrity or dignity, it’s true David Federman is indisputably intelligent. He has a habit of mentally saying everything backward. If someone says, “I have no soul,” David’s mind goes: I evah on luos. “You’re such a misogynist.” Er’uoy hcus a tsinygosim.

His first college essay gains the attention of a celebrity professor, who invites David to join the next semester’s advanced seminar. Here’s the thesis he writes for Veronica’s paper on Henry James’ Daisy Miller: “The heroine captivates the scopophilic Winterbourne because he can only surmise as to the mystery of the ‘ambiguity of Daisy’s behavior’ beneath her deceptive, problematizing pulchritude.”

Wayne buries a goldmine of foreshadow in that sentence alone, but to elaborate would be to spoil. It’s enough, however, to represent his themes of narcissism and voyeurism, and it also gets at Loner’s most interesting questions: What is the intersection between love and obsession, and where is the line between the two? What have we lost when we value a quantitative, computer-like form of intelligence at the expense of qualitative, humanistic wisdom? What good are our most prestigious institutions of higher learning if they attract and produce monsters?

In an interview with his publisher, Wayne has said that he intends Loner to “afflict the comfortable,” and that’s certainly what the novel does. It’s a book that will at once captivate and make you wonder why you’re captivated, a novel that will cause you to interrogate yourself as you judge it’s characters.

Though clear allusions Wayne skillfully places his David Federman in the company of Captain Ahab, Jay Gatsby, Raskolnikov, and Humbert Humbert—obsessive, detestable characters we’re forced to empathize with. That is to say, Wayne clearly knows what he’s doing. Harvard or not, dude is smart. Gifted.