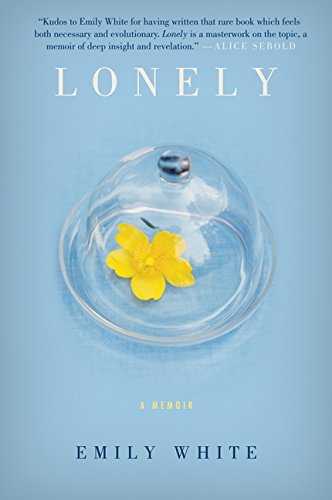 “. . . the lonely were more likely to have died than the nonlonely.”

Emily White’s Lonely succeeds as a survey book, specifically when she examines the surprising lack of research on what would appear to be a nearly-essential topic for study: human loneliness. She finds, for example, one study that demonstrated that post heart-surgery patients were twice as likely to die if they experienced the effects of loneliness. She also describes the more standard physical impacts that plague the person who remains in isolation, and to her credit she “had to find the papers . . . myself.”

The book is much less effective when it attempts to serve as a self-proclaimed memoir. To be explicit, the book would have been far more engaging if it had begun with a review of the research on the matter of loneliness, and then finished with White describing its impact on her own life. This is because much of what she stated in the opening seems either odd or contradictory.

This reviewer suspects that most readers will approach the topic with an understanding of loneliness as isolation. We are lonely when we must be away from the people who are close to us; as when, for example, someone leaves the family nest to go to a faraway college. But such loneliness is temporary, and others come in to fill the empty spots in our existence.

White, however, is the person who is lonely in crowds; she states that, “I just feel a lack of connection around people, even when I’m around people.” Thus, she responds to this by spending more time alone and, “The more time I spent alone, the more difficult I found it to be around others.” This seems desperately confusing, especially when we read about how she chose to live way across town from friends and relatives: “. . . odd . . . that I should have chosen a place so far removed (to live).”

White also appears to display a knack for making lemons out of lemonade. Of cherished car drives with her father she complains that they “always ended.” And although in law school she was surrounded by smart people, it seemed to signal the start of her era of self-isolation.

This reviewer must disclose that my life and the author’s appear to be considerably parallel as to our experiences, and yet, the very ones that she found limiting were for me empowering. Thus, we may have a clash of perspectives here. So, I will re-emphasize that White presents some valuable information when one views this work as a review of a little-developed field. To her credit, she raises some questions that do call out for an answer—such as whether or not loneliness is inherited.

White might have been well served by having the assistance of a professional writer who could have toned down her tendency to look at life through somber, dark-colored glasses. A second set of eyes in the person of an editor might have added a bit of joy to this look at our lives and the need for us to share it with others.