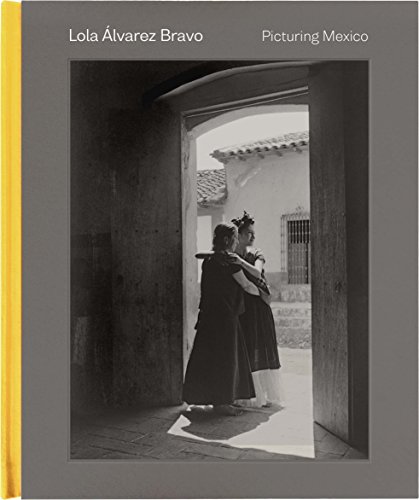 “Lola Álvarez Bravo: Picturing Mexico is a memorable collection of the work of one of Mexico’s foremost photographers.”

“I had a strange need for something and I didn’t know what it was. I was in intense rebellion against certain things they thought I should do because I was a ‘little woman’ and a ‘young lady.’ They thought I would respond to a predetermined social plan. But I felt a strange rebelliousness. I wanted to be something . . . It was an internal rebellion.”
—Lola Álvarez Bravo

Like a number of distinctive women of her time coming of age in the early years of the 20th century on the cusp of massive political, social, technological, and cultural upheaval, pioneering Mexican photographer Lola Álvarez Bravo (1903–1993) was determined to depart from gender-based conventions and forge a unique career and lifestyle true to her own emerging talents.

After growing up in the tumultuous years of the Mexican Revolution (1910–1920), Lola was taught the tools of her trade in the early ’20s by her husband, artistic photographer Manuel Álvarez Bravo, whose career eclipsed that of his wife for many years. Spurred by the breakup of the marriage in the early ’30s, Lola worked as a photojournalist, commercial photographer, professional portrait taker, curator, gallerist, and educator while developing her own more experimental creative interests.

Lola Álvarez Bravo: Picturing Mexico edited by Stephanie Weissberg, assistant curator at the Pulitzer Arts Foundation, St. Louis, including essays by her and art historian Karen Cordero Reiman, highlights the photographer’s personal work along with some better known portraits of her modernist contemporaries and some iconic captures of a profoundly transformative period for Mexico’s land, architecture, and people.

This volume is essentially a catalogue accompanying the Pulitzer Arts Foundation exhibition of work Álvarez Bravo identified as “images that affected me deeply” presenting nearly 50 photographs and photomontages spanning the five-decade arc of her career. (September 14, 2018–February 16, 2019, St Louis, Missouri).

Together, these photographs spotlight the unique ways in which her modernist gaze with its focus on pattern, light, composition, and abstraction frames her depictions of Mexico’s rapidly changing urban and rural landscapes and peoples captured as she travelled the country in the course of her work.

As such, Álvarez Bravo not only had a major influence on the history of photography from an aesthetic experimental standpoint, but she played an important role as a contributor to and documenter of Mexico’s social and cultural transformation. She hoped that her work would stand as a memory of Mexico past in a rapidly changing present.

At the same time, her professional career was uniquely trailblazing as a rare and often stigmatized endeavor for her times:

“I constantly had problems . . . Unfortunately, it was because I was a woman, and this made me even madder . . . I learned to become aggressive and find words to defend myself. Once when I was working up on one of those towers that they use to extract petroleum, some workers came by and stood there watching me merrily. So immediately when I came down I walked toward them looking through my camera as if I were taking pictures, and suddenly I asked them: ‘Hey, do you work here? Then why don’t you respect a woman who is working also?’ And they blushed and apologized.”

The images included in this volume not only are exemplary of Álvarez Bravo’s evolving craft as a photographer, but also draw the viewer right into the scenes portrayed via a kind of guided projective test.

The frontispiece is emblematic of Álvarez Bravo’s eye for light, shade, pattern, and movement of both her subjects and of her times. Unos suben y otros bajan (“Some Go Up and Some Go Down,” ca. 1940) shows men in suits ascending and descending an outdoor metal staircase where the vertical and slanting bars and slats and their shadows form the defining frame of both the actions and the actors—up the down staircase on the treadmill of modern working life?

Images of labor are a recurring theme, as indigenous peoples, peasants, and workers had played a major role in the revolution. Las Lavanderas (“The Washerwomen,” ca 1940) shows a group of women and girls laundering on the shore of a body of water. Taken from above, a pier perhaps given the rectilinearity of shadows cast on the scene, the women’s faces are obscured as they are immersed anonymously in their tasks via another play of light, shade, and ambiguous motion in a convergence of built environment and landscape.

The architecture and landscape intersection is further explored in images of modernist buildings as well as photographs of traditional structures and construction methods such as her intricate depiction of the pre-Hispanic eponymous building technique Bajaresque (ca 1938). In this piece, the photographer comes in so close that the left side of the frame is filled with tightly bound layers of reeds and twine while the right is the finished wall of soft grey mud and fiber daubed over. The viewer is immersed in the construction process.

Indigenous motifs loom large in the collection highlighting the richness of Mexico’s cultural heritage and the inevitable erosion of it by modernity. One of Álvarez Bravo’s most famous images Entierro en Yalalag (“Funeral in Yalalag.” 1946) is an intimate glimpse into the performance of indigenous ritual.

A group of Zapotec women are participating in a burial procession wearing white veils over matching long huipiles (blouses) that shine bright against the desert landscape. The focus is on the movement of the mourners rather than on the coffin as the viewer’s eye follows the progress of the procession. “The figures move across and disappear beyond the picture place, implying both the immediate past and future of the procession,” writes Stephanie Weissberg.

This unique capture of motion and meticulous positioning of the camera became Álvarez Bravo’s signature photographic practices, along with her showcasing of light, textures, and angles, and her use of post-development enhancement of contact prints via cropping, rotation, and the like in an era when the majority of her modernist peers forcefully opposed such manipulations in the name of a truthful, unenhanced photographic vision.

Álvarez Bravo’s portraits of friends, collaborators, and professional contacts, better-known outside of Mexico than her other work, are marked by their keen observation and honest renditions. Her friend Frida Kahlo is shown seated upright on her bed in her home studio, intimate and vulnerable, a reminder of the chronic illness and pain featured in many of her paintings. Another shows the legendary photographer Henri Cartier-Bresson in the process of capturing a Siqueiros mural still in progress as he zeros in on his target with laser beam concentration.

Lola Álvarez Bravo: Picturing Mexico is a memorable collection of the work of one of Mexico’s foremost photographers, yet little known outside her own country. The volume is nicely produced and presented doing justice to the arresting photographs. The two essays provide useful theoretical and contextual frames which bring the artist to life as a person by situating her as a critical feminist activist determined to expose Mexico’s intertwined legacy of colonial oppression, inequality, and racism through her lens.

One puzzling omission is the decision to caption most of the pictures in their original Spanish without translation, thus limiting their accessibility. Otherwise this volume should appeal to quite a wide range of general photography buffs as well as Mexicanists and fine arts specialists.