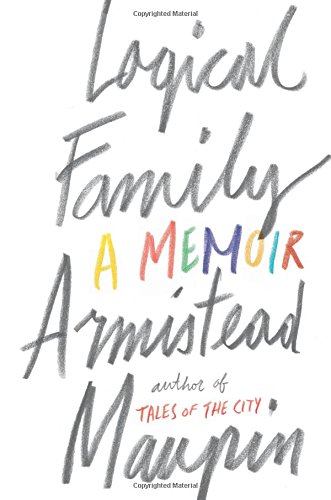 “Sooner or later, we have to venture beyond our biological family to find our logical one, the one that actually makes sense for us. We have to, if we are to live without squandering our lives.” —Armistead Maupin

It’s something Armistead Maupin seems to have managed rather well, judging from some of the characters populating both his novels and his private life.

Fans of his fiction be warned: Reading this memoir will probably give you a slight case of déjà vu. No matter. You’ll soon find out he’s by no means said it all. It took Maupin more than 30 years to claim his truth, he says. And if readers have seen some of it before, in interviews, newspaper essays, or popping up in his fiction, particularly his bestselling Tales of the City series of novels, “. . . please know I reserve the right to plagiarize myself.”

What is, after all, the point of a memoir? Pride? Nostalgia? Justification? Explanation? In this case, all four make appearances—the first in more ways than one—covering the broad strokes of a life well lived, as well as the nuances.

Don’t expect it to be a campy gossip-fest from the feted gay activist. While its true names are dropped like sequins off a drag queen’s dress, there’s ample justification. After all, how could Maupin possibly tell his own tales without discussing those who often peopled them?

The scenes that are likeliest to stay with you, however, are variously infuriating, touching, sad, moving, and tragic. Like his fictional linchpin Anna Madrigal, Maupin’s need for the “logical family” of this book’s title has perhaps been greater than most.

Brought up in a traditional Southern household, to say his parents were conservative is an understatement. Even the playhouse built in the backyard when he was six by his father proclaimed that fact.

“Above the porch, above everything, Daddy had emblazoned a message with my mother’s red nail polish: SAVE YOUR CONFEDERATE MONEY! THE SOUTH WILL RISE AGAIN.”

It should come as no surprise then that Maupin himself grew up embracing those conservative views. When, at 16, he was named student City Manager of Raleigh for a day, he told a reporter that “young right-wingers like me would soon be of voting age, and that should serve as fair warning to liberal politicians who wanted big government and socialism.”

Conservatism notwithstanding, his less conventional sexuality weighed on his teenage mind:  “I knew I was mentally ill. I had read it somewhere in a magazine . . . But I couldn’t bring myself to tell my parents, even if it could save me from permanent insanity. There were mornings when I woke up thinking, Tonight I’ll tell them. After supper, maybe, or after Gunsmoke, when Tony and Jane and Mimi are in bed. But I never found the nerve.”

When finally, a quarter of a century later, he decided to level with his mother, it was—perhaps misguidedly at the time—in a letter written by a fictional character in his Tales of the City newspaper column.

“I had poured my heart into it with such naked intimacy that I knew she would realize that the message was meant for her,” he says. No response was forthcoming, but what did he really expect? “The letter had appeared in a San Francisco newspaper where millions of people could see it . . . but it could hardly be described as an act of bravery. I had avoided the chance of rejection by addressing it to everyone and no one. I had thrown in down a well, and there was no voice from the bottom.”

At the time, he may not have done himself any favors but, in a real-life twist that must now delight the author, his “Dear Mama” letter has become a kind of coming out clarion call, used countless times by those whose own words can’t adequately explain all they want to reveal, read aloud by celebrated actors, and even put to music.

While his parents may not have completely cottoned on to his natural inclinations, it’s likely his flamboyant, palm-reading “Grannie” who insisted he was the reincarnation of her extremely artistic bachelor cousin, Curtis, knew exactly who he really was. She was the first member of his so-called logical family, he says; ironically the only blood relative who was.

In some ways it’s just as well she didn’t have more say over his early upbringing. Had he been allowed to blossom in his own true colors, the nine bestselling Tales of the City novels may never have been born.

After a stint in Vietnam as a navy communications officer, he was working as a reporter for the Charleston morning newspaper, the News and Courier, covering the military and academic beats, when he was invited to return to that country as one of the so-called Cat Lai Commune, formed to counter the “long-haired peaceniks” of John Kerry’s Vietnam Veterans Against the War.

“I earned my keep by writing inspirational pieces about our experience,” he writes. “For two sweltering months we were a high-profile, right-wing Habitat for Humanity” whose main job was to talk to the press.

On his return, he was offered a job with the Associated Press in San Francisco, having turned down a position in Buffalo. In the meantime, his devotion to duty was rewarded when he was among those summoned by the White House to meet President Nixon, who wanted to thank them personally for their volunteer efforts.

“Importantly, for the president, he wanted to recognize them on the same day an anti-Vietnam was planned outside the White House,” he now notes.

To his horror, Nixon also tried to talk sex—at least, “a little wink wink, nudge nudge with the troops.” As “lousy” luck would have it, he’d chosen to do it with Maupin and not one of the more conventionally red-blooded males gathered in his presence!

If anything really taught the author about himself it was probably the liberalizing freedom and “deeply democratizing” excesses of San Francisco. A late starter, he made up for it and then some in heady seventies San Francisco.

A fictionalized piece written for Marin newspaper the Pacific Sun about a true-life group of housewives who spent their evenings loitering around a local supermarket veggie section looking for a little male company struck a positive nerve with readers. He was asked to continue following “Mary Ann’s” adventures in a new San Francisco edition of the newspaper, but the rest was definitely not history. The paper folded five weeks later.

“I fell into a funk,” he recalls. Knowing nothing and caring less about the subject, he somehow ended up writing press releases and diva profiles for the San Francisco Opera, whose boss was a tyrannical homophobe. Like it or not, though, it was this miserable job that led him to his life’s success: a society columnist he’d met at opera fund-raisers tipped him off about the interest shown in his series by a senior columnist—another homophobe, believe it or not—at the San Francisco Chronicle, who deemed him “just vulgar enough” to fit in.

It must have been a daunting gig requiring as it did a column, not once a week as before, but 800 words a day, five days a week. So vaguely did he draw the boundaries of his new Tales of the City, the columns were, he recalls, “as bland as a hospital meal.” One reader even asked which high school the newspaper’s new writer attended.

Self-preservation, nervousness, sensitivity, call it what you will, it didn’t last. Caution was soon discarded as readily as clothes flung off in a gay bathhouse. A slightly mortified managing editor showed him a two-column wall chart listing “Heterosexual” and “Homosexual” column characters. At no time should the gay people number more than a third of his imaginary population, came the instruction. It’s an episode as hysterical as some of the scenes in his successful series, though to be fair it was probably necessary. “Almost overnight the serial had gone gay as a goose,” he admits.

Reconciliation (of a sort) with his father happened unexpectedly and in the midst of a heart-breaking tragedy that rocked the gay world. Maupin’s parents, his mother frail and ill, were visiting him in San Francisco. His friend Dave Kopay—a former NFL running back and the first professional athlete to come out of the closet—had been planning to throw a brunch for Maupin’s folks on the last day of their visit. Proud as he was of all his friends, he thought Dave would be “the perfect poster child for selling homosexuality to my old man. For me (and for so many people across America) Dave was living proof that We Are Everywhere.”

When Maupin received a call from him on the day, it was nothing to do with the preparations. It was to find out if he’d heard the shocking news: “cool straight” liberal San Francisco mayor George Moscone and gay San Francisco supervisor Harvey Milk had been shot dead at City Hall. Kopay and Maupin knew both well enough to call them by their first names. The assassin was Dan White, a disgruntled, homophobic former supervisor.

Word came through to them of a memorial service for Moscone and Milk to be held later in the day. His mother, making a good show of telling them it would be fine, told him to go and not think twice about it—they’d catch a cab back to their hotel.

Mourners carrying candles in paper cups began heading toward the Civic Center, hundreds more joining them at every intersection. The scene was, he recalls, almost phosphorescent in its beauty, “like plankton on a night tide. And I had never heard such silence.

“It was my youngest friend, Daniel, who spotted the miracle in our midst.”

Read it for yourself and weep.

Maupin’s memoir is dedicated to perhaps the most important member of his logical family, his husband, photographer Christopher Turner, whom he married in 2008 and of whom there is surprisingly little mention. And who can blame him for that? This is a memoir, not an autobiography—incidents and memories, rather than every single detail of a life.

Logical Family is just as well written as you’d expect. It is frank, the language it contains is unequivocal, and most of all it is damn good. If you have a soul, it will move you not only to laughter but also to tears.