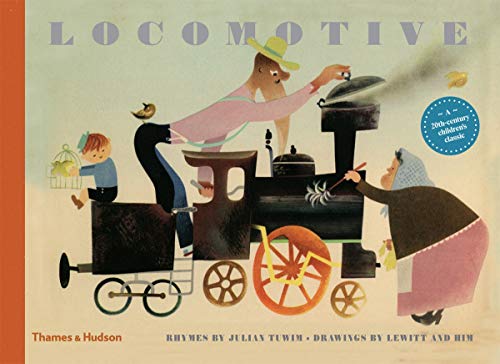 “All three stories and the illustrations are remarkably creative and fun.”

Locomotive is a new release of a 1938 Polish picture book first published in English in 1940 that has retained all of the charm of its classic era. The illustrations, the type, even the paper seem a freshened version of the original.

Julian Tuwim (1894–1953) was a well-known Polish poet and lyricist who was asked to write something for children. He surfaced with Locomotive, The Turnip, and The Bird’s Radio which became the three stories that are included in this book. Jan Le Witt (1907–1991) and George Him (1900–1982) were a famous graphic design and illustration team in Warsaw in the 1930s.

Locomotive is simple yet visually stimulating as it chugs out from the station. In the very first page the reader is already feeling the pulse of the engine, hearing the hiss of the steam, smelling the burning oil, being caught up in the hustle and bustle of the crowd.

“Here is the engine, black, stupendous, Dripping with oil, its heat tremendous. Eager it waits; and its body glows, While the bursts of steam that it pants and blows, seem proud, impatient.” The poem’s words are stretched out along the train tracks as if part of the cargo being tugged behind the engine. Such well done design continues throughout the book.

The expressive, energetic language of Locomotive evolves with a “ravenous roar,” as the poem vividly narrates all the items that the train is carrying in each heavy boxcar. Bananas, pianos, furniture, animals, and people have loaded the cars to bursting making the engine scream, creak, grind, shriek, and jerk as it gains momentum and hopes to reach its destination on time.

In The Turnip, Tuwim creates a train of a different sort. An old farmer is struggling to pull his turnip out of the soil, but it refuses to budge. Immediately the reader senses the urgency to harvest the turnip because they are salivating over the delicious description of the vegetable-turned-dinner that is the turnip’s destiny.

Although still in the ground, everyone can smell it cooking; out come Grandma, young Theo, puppy Leo, Lady the cat, Sadie the hen, Sissie the goose, Chrissy the stork, Philip Frog, and finally Percy the crow all pulling together. The size of the released turnip is enough to make a head spin. It will most likely take the same gang working together again to chop it up for the stew pot.

The train theme is not abandoned on the final story, but is carried out in yet a different manner in The Birds’ Broadcast. Here, all the birds carry on a train of thought, running chitter chatter commentary of everything going on in the woods. The menagerie is present at a conference table lending themselves an air of self-importance. From nightingale to blackbird, woodpecker to robin, owl to lark, 20 or so species of birds are gathered to make announcements in their own language. And what a din it is.

One group cheeps, one twitters, one chatters. Cock-a-doodles get interrupted by cuckoos. Mimicking, preening, fluffing, and posturing are all misinterpreted and misunderstood and no one thought to bring a translation dictionary. Communication deteriorates until the birds’ behavior is woefully out of control. The police birds are summoned, and the train of temper tantrums is put to an end.

All three stories and the illustrations are remarkably creative and fun. The impressive translation maintains a seamless poetic rhythm and rhyme and is still relevant 80 years later. Don’t be fooled by the old-fashioned vibe, this book smartly holds its own alongside contemporary children’s literature. It is indeed part of the classics category from the 1940s which includes titles such as Horton Hatches the Egg (1940) by Dr. Seuss, Curious George by H. A. Ray (1941), Make Way for Ducklings (1941) by Robert McCloskey, The Little House (1942) by Virginia Lee Burton, and The Runaway Bunny (1942) by Margaret Wise Brown.