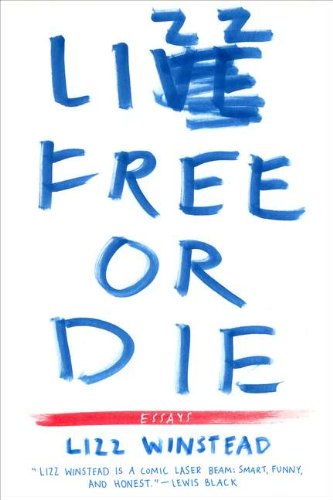 “I wonder why she tries so hard for laughs. It seems that her native cant is studded with rueful humor—if any at all—as she views the world through her Lizz-colored glasses.”

Many of us have had the unpleasant and inexplicably sad experience of having a friend who thinks he or she is funny, but who, in reality, simply is not. The friend tells anecdotes that are meant to amuse, to elicit heartfelt laughter, and yet some essential aspect is missing. The timing is off, or, worse, the material itself just is not funny. No matter how much you might like the person and enjoy his or her company in theory, ultimately the chasm between funny ha-ha and attempted-funny sadness often proves too wide a gap to cross.

Those who have not known the pain of such a relationship can join the rest of us thanks to author Lizz Winstead, who offers a veritable banquet of unfunny “humorous” essays on a multitude of topics in her new collection, Lizz Free or Die.

Words, for Ms. Winstead, are apparently cudgels, and the more words she uses, the more she pounds the reader over the head until reading becomes sort of a “dark alley mugging experience,” all supposedly in the name of insight, enlightenment, and humor.

In the introduction to her work, she writes:

“This is a book of essays about life. My life.

“It’s not a memoir, per se, as I decided to write about some specific moments that will give you some insight into the people, places, and experiences that propelled me forward. (With a few steps back in the process.) I think of these pieces as ‘messays,’ because they are a collection of stories that put my somewhat complicated life into perspective—or at least a kind of perspective.

“I have been through a lot of the same stuff that you have dealt with, are dealing with, or will deal with in the future. From the struggle of being a young girl trying to find her voice, to the unlikely places she found it, to the realities and heartbreak of watching an aging parent die, this book gives you (I hope) permission to be honest with yourself, to laugh, to cry, to bitch, and to scream. And maybe if you come across any of those emotions while reading, you will realize that you, too, at some point in your life had been told to ‘restrain yourself’ because you needed to be ‘appropriate.’

“I hate the word appropriate.”

Honesty? Possibly, who can say?

Crying—well, more like misting up a bit due to sheer frustration.

Which tends to suggest that something is amiss, when the author’s bio lists her accomplishments as including the fact that she is a “performer and stand-up comedian” as well as “a cocreator of ‘The Daily Show,’” and the publicity blurbs keep throwing around phrases and words such as “brilliantly funny,” “invigorating,” “hilarious.”

Lizz Free or Die offers a series of “messays” (Is that “me-says” or “mess-says?” is never made clear) on myriad topics and a wide array of comedian-issued “insights” as well, such as:

From the essay “Two Dogs, One Cup,” on pet care:

On the subject of dealing with an aging parent, from “Jesus Trapezes:”

“All five Winstead kids desperately tried to find the delicate balance between honoring the unique organizational skills my mother developed over eighty years, a technique I call ‘single-tasking,’ and stabbing her in her sleep.”

On breaking her way into the world of comedy:

“It was like the ‘American Idol’ auditions every week, and I could always be counted on to provide brutal running commentary to everyone within a twenty-foot radius of us in the audience. So when some poor woman finished doing a Romeo Void song, I might have said something like, ‘Honey, after seeing that, no one would like you better if you slept together.”

I guess you had to be there.

Unexpectedly, Ms. Winstead fares much better when she is not trying to be funny. When, without warning, she writes from her soul, there is so much to admire:

“When they took Dad to the hospital for the last time, he called me from his room.

“’Lizzy, the paramedics asked me if I was on any medications. I told them everything but Viagra. Then they put the oxygen mask on me.’

“Those were the last actual words I heard him say.

“It was a hot August day, and it was my birthday. I was celebrating it in Coney Island with my sister Ann and her family. The cell phone service was shitty and the call went dead.

“I told them the Viagra story and we laughed. It was typical of Dad: dark, inappropriate, and funny.

“We talked to my sister Linda that night and she told us Dad was scheduled to leave the hospital on Monday. He would then go for a week to the place he had come to call ‘the Lutheran Abu Ghraib,’ which was more colloquially known as a rehab center.

“Linda called back the following morning. We were all in the elevator of my loft, as we had just come back from the dog park.

“’You need to come home,’ she said in a voice that sounded like a little girl who had snuck away from the babysitter and called her parents because she was scared. ‘Dad is dying.’”

Read that last bit again—that beautifully rendered image that recalls the gulping sound the frightened child makes over the telephone when asking her parents to hurry home from the restaurant that they finally, after waiting so long, had the chance to visit.

And then the simple, potent, “Dad is dying.”

What follows is as perfect a recreation I have ever read of the chaos, the dry ache, and, yes, the absurd humor accompanying the death of a parent.

Given that Ms. Winstead is capable of such superb stuff, I wonder why she tries so hard for laughs. It seems that her native cant is studded with rueful humor—if any at all—as she views the world through her Lizz-colored glasses.