The Lizard Princess: The History of Arcadia 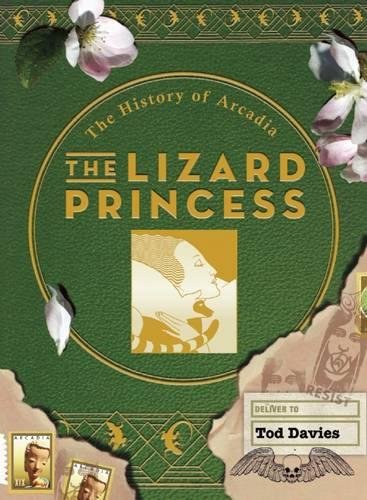 What an odd, intriguing, and often captivating book The Lizard Princess is. It's the third book in a strange series that seems to be covering all age groups, but it reads like a stand alone and holds a complete story in its pages. It's also about story, the way the stories we tell affect the way we're capable of seeing the world.

Told in a neat, semi-non-temporal way, from the point of view of someone much older now than she was in the events the book covers, it wanders the way memories do but always comes back to the point: the making of a queen out of a young cursed princess. It's a coming of age story. It's also a loss of innocence story that doesn't conflate innocence with virginity—she loses the naive views of a child when she learns the hard truths of an adult, not when she goes to bed with someone, and that's refreshing. She grows as she connects with people and sees how the world actually is, rather than how she'd like it to be—even when two distinct worlds coexist. And it's about choosing how you will view the world and what you will do about what you see, something many loss-of-innocence stories stop short of.

The feel of the book reminds the reader of Narnia—if Narnia were aimed at adults, and if its closest neighbor were a scifi dystopia that entirely circles it and denies the reality of magic despite the evidence. It's a story of struggle, rebuilding after disaster, understanding, and the need to be relentlessly true to yourself while also being realistically optimistic.

Sometimes, it reads like those philosophies-embedded-as-stories books like the Celestine Prophesy, but is much better written. Other times it reads as pure, gorgeous myth, even when talking about things that should clash with a mythic voice, like space stations and destroyed megalopolises. It's a book more about ideas and emotions than events, and it encourages big-picture thinking.

The histories of the peoples and the lands at the heat of the novel are tied together and inform each other in unexpected ways, as do the realities they inhabit. Amazingly, the book manages to perfectly balance a fantasy-magic world with a coexisting and just as real magic-free world, and as Sophie comes to realize the reality of both, The Lizard Princess gets much more layered and complex. The way the story treats history as an active, still-occurring event is a nice touch that lends vitality and realism to what is a remarkably distinct other-world setting.

There's an odd pervasive mistrust of science that could partly be because the story grows from a fantasy setting at war with a scifi one. Most of the time, however, it's a background feel while the characters move around the varied and interesting settings accomplishing goals and learning lessons they need, to do what they set out to do.

The events of the story are being told as legends by someone who lived through them and became a legend herself. She now has the hindsight of someone who has also been through a lot else afterward, and she knows the context and the outcome of events she was just suffering through blindly at the time. This yields a looser, broader scope, more academic, but also more personal.

The combination of a straightforward quest complicated by hindsight, with magic, science, and meditations on the building of myths and the role of stories, makes for a book not like much else out there. It's not long, but it covers a lot of ground—literally and figuratively.

It's a pretty fast read, but it introduces ideas about life and love and reality, and it encourages the reader to pause and think about these things. Sometimes it's borderline preachy, but it's always gorgeously written and complex in the way an intricate tapestry is. And it's always not like anything else. The Lizard Princess knows what it is and what points its trying to make.