Living Trusts for Everyone: Why a Will Is Not the Way to Avoid Probate, Protect Heirs, and Settle Estates (Second Edition) 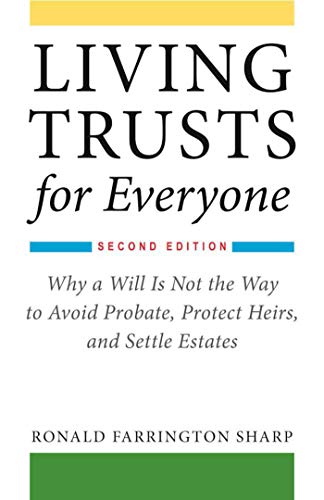 “The fact is that nearly everyone would be better off with a trust than with a will. In most cases the only person who benefits from your having a will instead of a trust is your lawyer.” For almost any lawyer—this one included—these words are tantamount to heresy. However, as the title notes, the book was written for everyone, not just lawyers. And the author makes a very compelling argument against the use of a will to settle one’s estate after death.
Sharp notes that, unlike a will, which must be probated—that is, submitted to the court to resolve all claims against the estate—a trust does not need to be probated. And he goes to great lengths to prove this point, forming, essentially, the entirety of the book.
But he does a very good job in this regard, and one that has many ramifications for the legal industry as well as individuals who read this book. In his slim volume, Sharp lays out the many benefits of using a trust instead of a will, including but not limited to:
· the aforementioned avoidance of probate—which equates to fewer costs;
· privacy—a will is public, a trust is private;
· asset management—for example, providing $30,000 when a beneficiary reaches 21, another $30,000 at 31, and the balance of the trust at age 50; and
· ease of revocability—unlike a will—which requires another legal document called a codicil, two disinterested witnesses, and a notary to alter—a trust needs only a signed, dated, and notarized writing explaining desired changes.
The author also lists the steps required to create a trust and describes fully the various types of trusts available. He does not, however, provide an example of a trust document, and rightly so, because the intricacies of drafting a trust do require the judgment of a lawyer. And this is where Sharp concedes that a lawyer is necessary; but the cost of drafting a will compared to the overall cost of creating a trust is minuscule. It bears noting that Sharp himself is an experienced attorney who has, by his own account, prepared over 3,000 trusts since starting his practice in 1975.
One complaint about the book is that it spends a good deal of time on various scenarios—such as what to do when there is a disabled child involved—which may or may not apply to the reader’s situation. In that sense, however, the book works well as a reference, and Sharp takes pains to cover the most common situations that the average American may face in preparing such documents.
Moreover, there are chapters entitled, “You do not need a trust if . . .” and “Problems with Trusts,” but they don’t answer the questions succinctly enough. In fact, younger Americans with small or no children and small or no assets, most likely only need a simple will for the unlikely possibility of an untimely death.
However, Sharp makes a reasoned and strong case for the use of trusts as a complete alternative for wills. For roughly the cost of a lunch, Living Trusts can, if nothing else, equip the average American with enough thoughtful questions to ensure that his or her lawyer is doing all that s/he can to protect that person’s assets. For that alone, it belongs on your reading list.