Living in the Shadow of the Cross: Understanding and Resisting the Power and Privilege of Christian Hegemony 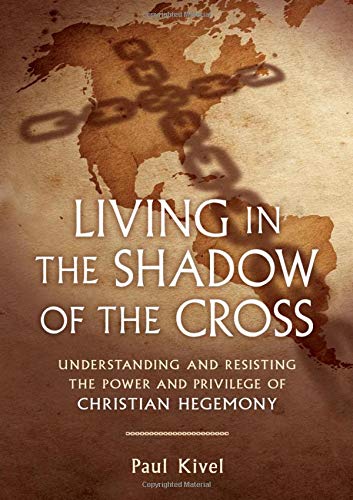 Do you live in America and therefore think you live in a secular society separating church and state?

Maybe you aren’t religious, aren’t Christian, or aren’t Christian anymore and figure you’re outside the reach of what believers do. Well, when it comes to Christianity and the United States, as Madge the manicurist said of Palmolive, “You’re soaking in it.” And that’s not a good thing.

Mr. Kivel takes a hard look at Christianity’s history and its fundamental role in and continued domination of American culture and politics. To his credit, even readers well versed in critiques of Christianity will find new and notable material here.

America’s operating system is a good/bad dualism, Mr. Kiven says, and he finds ample evidence in its foreign policy (you’re with us or against us, the “axis of evil”), its approach to problems (War on Terror, War on Drugs, War on Whatever), its citizens’ behavior (the world’s largest prison population), its racial stresses, economy, educational system, environmental stance, legal structure, and more.

This dualism, Mr. Kivel explains, derives from Christianity’s debt to Manichaeism, the Persian cult that spread throughout the Middle East from the third through seventh centuries, preaching a divine world of light and an evil world of darkness.

(Augustine of Hippo, inventor of original sin, was a Manichee before moving to Christianity with Mani’s cosmology in tow. Even the Reformation a millennium later didn’t open up new options; the Augustinian monk Martin Luther shaped much of Protestantism in the dualistic image of that Church Father.)

Mr. Kivel is painstaking in unraveling Christianity’s DNA in the American corpus. His tone is fair to caring and decent Christian individuals—it’s the unquestioned and highly questionable system at large he wants to expose. Stating that, “A hegemonic system provides a worldview—an intellectual framework, a language and a set of values—promoted as commonsense and therefore unchallengeable” he also provides a chapter advising how to challenge it.

One wishes that Mr. Kivel’s editor had cut the occasional generalizations that park in the PC zone, such as: “Christian women are taught that men of color are highly sexual beings whose very gaze will assault them. They are told they need Christian men who are strong, aggressive and armed to protect them from this menace.” Surely it’s more complicated than that, and fortunately, the rest of the book is strong enough to survive this kind of lapse.

Some of Mr. Kivel’s most interesting analysis looks at good/bad Christian dualism and how it drives American consumerism and workaholism:

“The emphasis on individuals as sinful can give people a deep sense of moral unworthiness that ruling elites under capitalism then exploit, encouraging people to become tireless workers and avid consumers. These elites can take advantage of latent beliefs about good and evil, as well as feelings of guilt, inferiority or badness, to manipulate people into buying products, goods and services they do not need and that may even be destructive.”

Another compelling section on the West’s linear temporality outlines how it (as opposed to many cultures’ circular temporalities) has fueled concepts such as Manifest Destiny, “progress,” and the realities of environmental destruction:

“The focus of attention on an Edenic and pure past state (nostalgia) and the aspiration to achieve such a state again in the future (hope) promotes a view of the world we live in as a place in which people are wayfaring strangers traveling through a land of temptation and corruption. The present is continually pressured by and measured against the past and the future—and must always come up wanting. The end result is the desanctification of the world, the present moment and our lives here on Earth.”

Mr. Kivel’s tone—much more humane than the Oxbridge atheists, for example—and his copious footnotes to some otherwise hard to fathom injustices both historic and current make this a readable and important book.