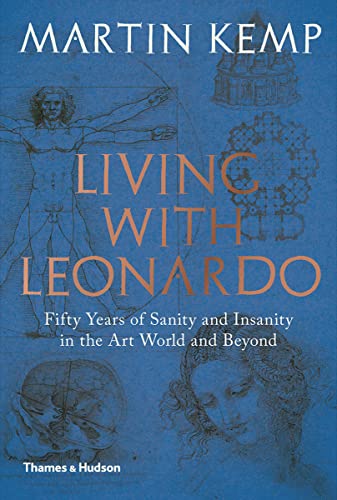 "Martin Kemp takes us on this great personal journey of adventure in exploring the art of Leonardo, and we are so much the better for it."

Martin Kemp earned notoriety 50 fifty years as an expert in Leonardo da Vinci who has published books on the great artist. The vast popularity of the subject encourages people "to confect new theories simply in order to attract attention" and Kemp has had dealt with "major scholars and authors, pseudo-historians, and fantasists," as well as "'Leonardo loonies'."

Living with Leonardo includes engrossing tales modern auction houses, authentication, exhibitions, restoration, and so much more. It even has a chapter around Dan Brown's The Da Vinci Code. Kemp's story telling is fun. The book has many illustrations in color.

The subject needs no introduction, the public knows the great artist and engineer for so much including the Mona Lisa, what has become "the world's best known visual image." Additionally, this greatest artist also created The Last Supper and "the world's best-known drawing: the naked man with four arms and legs, spread-eagled inside a circle and a square" (the Vitruvian Man).

Fortunately much from Leonardo’s world remains to tell of him. Many of his famous notebooks and other records survived the "extraordinary and tortuous journeys of attrition and survival, ascending unevenly but remorselessly to their present state of near-deification."

Living with Leonardo starts with a no-suppositions account of the life of the subject. Kemp outlines Leonardo's career of accepting the limitations of his master Verrocchio but evolving to new levels "striking in innovation," even with many "a project that never reached completion." More about the master's life appears elsewhere in this volume, such as a discussion of his mother and his birth.

Top level artists of the Renaissance found themselves too much in demand with more projects than they could handle with the pressing competing demands from different governments. Some of Leonardo's experiments such as the Last Supper proved unfortunate decisions: In that example, "Can we see the 'original' at all?" Time, war, and restorations answer "no."

Conversely, Leonardo brought to Italian art "narrative painting." He "engaged in geometry"; "digested the results of geological observations"; studied "water and air in their myriad varieties of motion"; and performed dissections including on a woman. Leonardo even studied anatomy in the context of engineering, math, and mechanics.

The great artist used these sciences to learn the pieces of history needed to tell "highly significant events" "as the highest aspirations of art." The Last Supper, for example, "is indisputably momentous" for there "Christ instituted the sacrament of the Eucharist, the sharing of bread and wine as representative of his body and blood."

Kemp's background in biology helped him in understanding the great artist as a practical scientist. Much in this book deals with the "amount of intellectual, imaginative and technical effort" that went into The Last Supper and "even more into the Mona Lisa." Kemp previously published on the latter.

Sections on controversies, history, and importance of other works follow. Blind wishful thinking and equal measures of cynicism surpasses even "very clever forgeries" as an issue in this field.

Kemp has seen too many "texts with plentiful data, diagrams and images to 'prove' the authenticity.” The "Leonardo industry" has created a "complex network of interests and biases." Kemp writes "my heart genuinely sinks in receiving messages from owners of supposed Leonardos."

"Being misguided about a Leonardo attribution does not mean that someone deserves to be treated with disrespect," however, and “a work of art is not responsible for who owns it." Two chapters deal with the identification of La Bella Principessa as a previously unidentified Leonardo and the resulting "ugly arguments."

Kemp was in the middle in that issue and other Leonardo controversies. He takes no money to evaluate "purported Leonardos" or even expense money to inspect them. This book says much about fallibility and even pettiness of the world of historical art that also exits in other fields.

The Salvador Mundi controversy involved how much, if any, it had "signs of Leonardo's magic asserted themselves" in that painting. Kemp's chapter on the theft of the Madonna of the Yarnwinder could be a modern forensic crime thriller. It and its related Madonnas already had a history "the stuff of novels and stage plays."

Living with Leonardo tells the story of Kemp accidentally becoming Leonardo's humble and obedient servant as the topic took on a life of its own. He meets a dizzying art world equivalent of Alice in Wonderland characters along the way. They make a story in themselves that becomes lost in the power of the notoriety of Leonardo.

Martin Kemp takes us on his great personal journey of adventure in exploring the art of Leonardo, and we are so much the better for it. At the same time, he also displays the practical side of the art world as a tour of his "house" (i.e. life). Works that share the writer's life with the subject often fail, but here Kemp succeeds, leaving the reader to judge throughout.