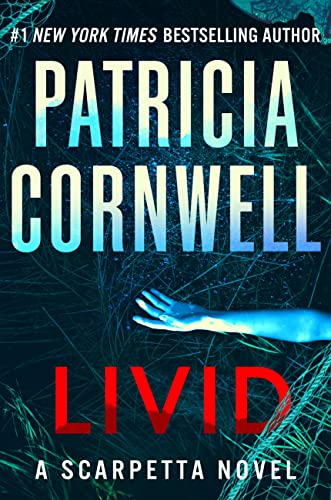 "Livid is largely inaccessible to readers not already familiar with this series."

Virginia Chief Medical Examiner Dr. Kay Scarpetta is embroiled in an unpleasant and sensational murder trial when the judge’s sister is found dead under mysterious circumstances at Chilton Farms, the judge’s home.

As Kay travels to the scene, she finds the drive complicated by protests related to the trial, the involvement of the Secret Service, the FBI, the Alexandria Police Department, and the internal machinations of her hated secretary and the equally obstructionist health commissioner.

Will Kay and her sidekick Pete Marino succeed in unraveling a strange and puzzling case involving a mysterious weapon, an apparent murder spree, and unfair attempts to smear her good name and professional reputation?

Livid is the 26th Scarpetta novel by Patricia Cornwell, the much-decorated novelist whose past experience in the office of the chief medical examiner of Virginia led to an impressive list of bestselling thrillers and a dizzying number of awards, medals, and citations of accomplishment.

As with any other New York Times bestseller who’s been active as long as Cornwell, she’s built up a fanatically loyal fan base, and there’s little doubt they’ll happily add this new offering to their Scarpetta collection.

However, there’s very little here that would encourage someone encountering this author for the first time to go back and read the other novels in the series.

Part of the problem is that Cornwell’s not a natural writer. Her prose is labored and stiff. Her pacing is uneven, and her constant shifts from direct conversation to indirect dialogue, where the narrator suddenly intrudes to summarize what’s being said, are annoying and disorienting.

As well, her chapter breaks often seem oddly random, as the action suddenly peters out with little warning. Add to this her penchant for misusing clichés and idioms such as “out of the frying pan and into the fire,” employing them in contexts that aren’t quite appropriate, and the overall result is a story that’s something of a chore to read.

A further challenge is a disjointed, half-coagulated plot that’s slow to develop and difficult to follow. As we work our way into the novel, we soon realize the trial at the beginning is not the focus of the story. Instead, it’s a device to (a), win immediate sympathy for Kay as an unfairly bullied and harassed witness, and (b), bring Judge Annie Chilton, an old friend of Kay’s, to our attention for further development.

The death of Annie’s sister, Rachael Stanwyck, will apparently form the central mystery of the novel, but the journey from the courthouse to the scene is so convoluted and drawn out that we’ve actually read 150 pages before the corpus delicti finally appears before us. Given that most procedurals normally take only a chapter or two to bring us to the crime scene, this lengthy process is frustrating and tedious.

Did we mention yet that there was an assassination attempt on the president of the United States that would seem to have taken place during all these other various happenings? Hence the active presence of the Secret Service and Kay’s beloved husband, Benton?

We can’t escape the feeling that we’ve come into the middle of a bunch of stuff we should already know about. Perhaps from a previous novel. Or novels.

Toss in the Havana Syndrome, that mysterious illness experienced by U.S. government officials abroad, the aforementioned weird weapon, and constant oblique references to the Doomsday Commission, a White House-appointed task force on which Kay serves, and new readers are confronted with a mulligan stew that’s difficult to swallow and impossible to digest.

Occasionally the author steps back to attempt more universal observations on the human condition and Kay’s perception of life. When thinking about her former deputy chief, who was unsuited to the work, she muses that “Forensic pathology takes you places you think you’re fine to go but can’t come back from.” Earlier, when showering and dressing after finally reaching home on such a trying day, she looks at herself in the mirror and thinks, “No matter what I do, I always look like myself.”

It’s hard to know how to take these observations, but they certainly give us something to think about.

Unfortunately, though, this novel is short on insight and long on confusing non sequitors and dangling plot threads. Livid is largely inaccessible to readers not already familiar with this series. It’ll likely please her fans, but few other readers beyond the inner circle will find it satisfactory.