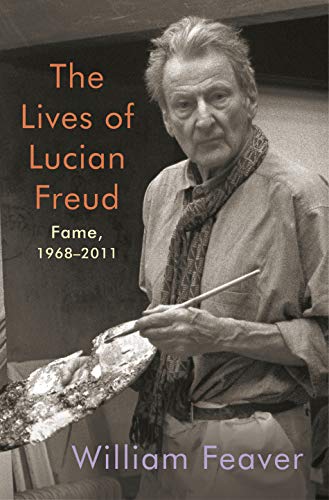 ”Many will judge that, despite all the emotional chaos, William Feaver has cornered a lion, and that Lucian Freud has earned his place in the pantheon of great post-war realist painters.“

There is a delicious irony that the grandson of Sigmund Freud grew to personify all that has been described as the id in Dr. Freud’s troika of the psychological foundations of the human personality: the id, the ego, and the superego. The id is all primal impulses and is undeterred by the ego and the superego in its unrelenting pursuit of libidinous pleasure.

Such is the life of Lucian Freud, the acclaimed realist painter as captured in the second volume of biography by William Feaver. The author, an art critic, historian, and curator had extraordinary access to Lucian Freud. Feaver served Freud as a confidante and father confessor as the artist achieved fame in his life. This book is the sequel to The Lives of Lucian Freud: The Restless Years which Feaver released in 2019.

Lucian was the id unchecked, and Feaver leaves no characteristic or behavior to the imagination. The artist was lecherous, lascivious, seductive, amoral, profane, petty, and vindictive. Coupled with his alcoholism and addiction to gambling, this portrait of the artist over the last 40 years of his life is a staggering journey into depravity and artistic passion.

Handsome like the devil and equally devilish, Freud had prodigious appetites for the sensual and the sublime. His extraordinary hunger for pleasure was matched only by his obsession with putting paint to canvas. Freud painted like a madman possessed, as indeed he was with all the pleasures of the flesh and the body that he rendered so well in his oeuvre.

Freud’s portraits are all sinew, muscle, and wrinkled skin. He captured a cadaverous look on canvas. He subjected his sitters to long and excruciating poses matched with deeply probing questioning and outbursts of temper. He demanded of many that they sit in the nude before him, a request with which most complied. He often painted in the nude and created self-portraits that are bold and fearless in their nakedness.

Fame finally found him and embraced him in the last 40 years leading to his death at 89 in 2011.

He acknowledged at least 14 children as his own. Freud’s almost total disregard for his offspring, either legitimate by marriage or dismissively called illegitimate by way of affairs and one-night stands, is shocking and troubling. He had no hesitation painting his daughters in the nude. He felt that through their posing they could get to know and understand him. He posed his daughter Rose, her genitalia fully and salaciously exposed, at age 19, in a painting reminiscent of Gustave Courbet’s The Origin of the World.

Freud was constantly grooming young models for artistic and sexual conquests. One can imagine that his studio reeked of sex, semen, wine, and turpentine.

The pace of The Lives of Lucian Freud is fast, feverish, and frenetic. People, places, and portraits fairly dance off the page in an endless loop that simultaneously fascinates and repels. Feaver has enough material for 10 books on his subject. Lucian Freud held nothing back from his biographer. Volume two captures Freud’s sudden ascent from poverty into wealth, and from obscurity to fame and infamy.

Underlying this rigorous portrait of the artist is a profound question. Can great art emerge from great depravity? When we look at the work of great male artists of the past like Balthus, Klimt, and Lucian Freud, does their pedophilia or their womanizing change our perception or appreciation for the canvases they created? Picasso had many affairs and mistresses to fuel his passions. Can the onlooker separate the mania and obsessions from the artistic product and the need for a muse and younger and younger companionship?

Feaver skirts this question deftly. He stays with the descriptive and not the judgmental. It’s ultimately the art and not the process. Freud’s complexity and debauchery are secondary to the output.

Feaver has created as much a diary as a biography, and, unfortunately there are too few illustrations of Freud’s art, but there are just enough pictures to convey that Freud was a master at conveying flesh and the human figure. His subjects are bulbous and distorted, but profoundly captured.

At one point Feaver quotes Freud on his 70th birthday in 1992. “‘Though I hope to strain the onlooker’s sensibilities, what I’m really interested in is outraging my own one.’”

That citation is the essence of the psychodrama in the The Lives of Lucian Freud. Freud’s internal id, which manifests itself in outrageous and provocative behavior, is the fiery engine for his art. The reader is left on the outside, to render a verdict as to what Freud’s id and idiosyncrasies produced, and whether outrage and strained sensibilities can allow enduring art and can justify a stellar artistic reputation.

Many will judge that, despite all the emotional chaos, William Feaver has cornered a lion, and that Lucian Freud has earned his place in the pantheon of great post-war realist painters.