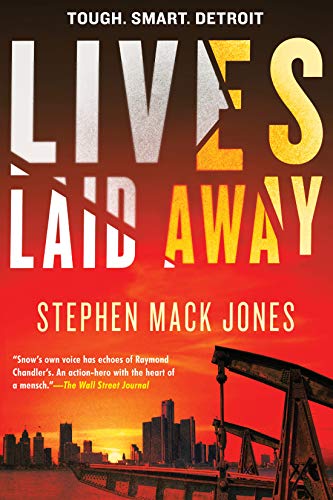 “Stephen Mack Jones' snappy, razor sharp writing is a delight to read. Lives Laid Away is movie material for sure.”

The author, in a display of excellent narrative, tells us just about all we need to know about protagonist August Octavio Snow in the first 500 words of this book. We learn he makes homemade salsa from his mother's recipe, he loves his father's favorite music, his heritage (Black and Mexican,) his dance moves (rhumba bolero, and he's good at it,) his stretch in Afghanistan, the status of his love life, and where he lives (Mexicantown).

In chapter two, we learn a bit more. He's been railroaded off the police force for looking into the former mayor's dirty dealings.

He came out all right, though:

"After being fired from the Detroit Police Department, the trial that followed and my twelve-million-dollar wrongful dismissal award, I'd wanted nothing more than to isolate my shattered self in a safe place. That had been the whole reason I'd renovated my childhood home on Markham Street . . ."

The story is set in Detroit, let's say in New Detroit, because regardless of what you may be reading in the news, that great city is on a huge comeback trail. Snow is instrumental in helping that along by revitalizing his block in Mexicantown. He pours plenty of his newfound money into improving his neighborhood by buying and rehabbing fixer uppers in a sort of one-man neighborhood renaissance.

Besides allowing him to live well, his money also allows him to pursue social justice issues by helping, or helping to hide, his friends and neighbors, both legal and illegal immigrants. People love and respect him, what he does in the community, and they love and respect each other.

When you get a bit farther into this book, look at the author photo on the inside back flap and see if you don't picture August Snow looking just like that. Big guy, kind eyes, nice smile, the face of a guy you'd want looking out for you in a pinch. A guy who keeps five burner phones in a shoebox in his closet.

When the drugged and raped body of a local teenage girl dressed like Marie Antoinette is found in the Detroit River, Snow is given a picture of the victim by one of his law enforcement buddies and asked to show it around. The description of what happens to a body when it lands in the river at 73 miles per hour is brutal.

Later, the body of another young girl is found, this one dressed like Dorothy in The Wizard of Oz, and Snow finds himself embroiled in a case of human trafficking, kidnapping, and sex clubs.

There's plenty of anger, even hatred, in this book mostly directed toward the U.S. government, federal immigration authorities, and the law in general. There's plenty of profanity, too, but then some of the characters are pretty bad and some are pretty badass, and that's how they talk. It's a good read, though, if readers can ignore the political bias that will be off putting to a good number of them.

One of the real strengths of this book is its sense of place, and the author's excellent portrayal of the color and vibrancy of life in these New Detroit neighborhoods:

Descriptions of such new hip, artsy, trendy communities and the people who live in them will please and thrill Detroiters, ex-Detroiters, and transplant Detroiters. Familiar names, places and streets are sprinkled into the story in abundance.

The author includes enough well-described action and shoot ’em up scenes to keep Rambo fans satisfied, some of which are legal and well thought out by the characters involved, some not legal nor well thought out. One of them lands Snow and his buddies in the local slammer.

In addition, Stephen Mack Jones gives us some of the most colorful characters in crime literature today.

"After a moment the door cracked open, revealing a third of a pretty woman's face including one emerald-green eye. . . . She was dressed for sex and murder; a short black leather skirt, form-fitting black lace bodice, seamed black stockings and black stiletto heels. Secured around her length of smooth white neck was a black lace choker bearing a silver skull.

"'You have lovely eyes,' she said, easing the hammer down on her Smith and Wesson .38. 'Like—chocolate milk.'"

And readers will love Nana:

"A devilish glint returned to her large brown eyes. . . . I  blew her a kiss. She caught it midair and slapped it to her right butt cheek."

Stephen Mack Jones' snappy, razor sharp writing is a delight to read. Lives Laid Away is movie material for sure.