Live from Cairo: A Novel 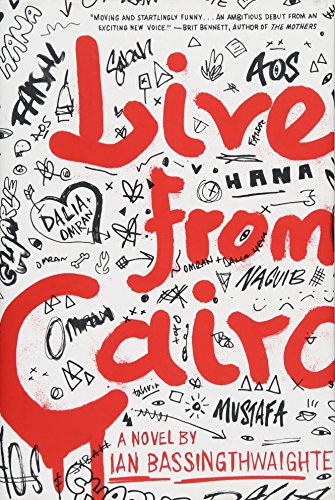 “a positive and highly successful attempt at helping readers grasp the enormity of the refugee problem . . . by pinpointing one individual’s struggles.”

Books highlighting the refugee crisis are taking the literary world by storm as readers become eager to learn more about the biggest and most difficult human crisis of our times. Another contribution to this burgeoning category of literature is Live from Cairo, a fast-paced novel set in Cairo, a city to which refugees from Iraq, Syria and elsewhere escape.

Cairo is undergoing its own problems during the timeline of the novel. It is the aftermath of the Arab Spring, and government thugs are cracking down on protestors daily. Life on the streets is tense and dangerous, and it is worse for refugees, who are scorned and resented because they place an undue burden on the city’s limited resources. At the same time the lives of the refugees are also miserable as they are unable to work or be reunited with relatives.

“Refugees come like dust blown from other deserts. Iraq, Sudan, Somalia. The men had survived abduction and torture. The women had survived abduction and torture and rape. Aggravated circumstances included missing relatives or children, various psychological disorders, and a high rate of arrhythmia. The average heart, it seemed, was unable to normalize after the shocks of learning what people could do.”

Dalia is one such refugee. She has escaped from Iraq, while her husband has been granted asylum in America because of his work with the U.S. army. Alone in Cairo, she seeks resettlement in America, but her petition is denied. Hana is an Iraqi-American woman newly arrived in Cairo to work at the United Nations agency where Dalia’s application has been processed. Her guilt over the inability to help the millions of refugees trapped in their situations is palpable and extreme, and as she rejects Dalia’s application she cannot help but feel overwhelmed by the overall situation that treats human beings as numbers.

Charlie is Dalia’s passionate attorney, one who is secretly in love with her and will cook up a plan to help her reunite with her husband even if it means breaking laws. Together these and other characters navigate the unfamiliar and difficult terrain of Egypt as they try to make sense of the refugee crisis and what it means to one individual.

Ian Bassingthwaighte is no stranger to the refugee crisis. He received a Fulbright in Egypt in 2009, where he worked in a legal aid office that served refugees from Iraq, Sudan, and the Horn of Africa. He was also named as a finalist for the Daniel Pearl Investigative Journalism Initiative.

His debut novel Live from Cairo is a positive and highly successful attempt at helping readers grasp the enormity of the refugee problem, not through statistics and investigative reports, but by pinpointing one individual’s struggles. Through Dalia’s eyes we see the chilling effects of war in Iraq, the challenges refugees face when they attempt to resettle in other countries already fighting their own political and human battles, and the impossibility of agencies such as the United Nations to grapple with such a huge problem.