Live by Night: A Novel 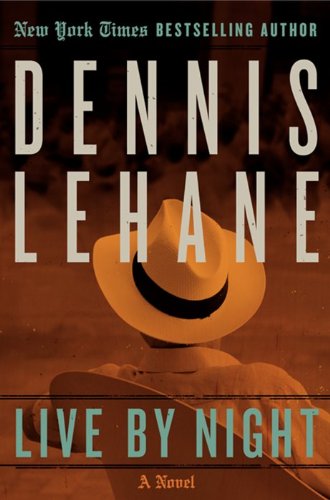 “Dennis Lehane is a natural and captivating storyteller . . . a modern day classic.”

Live by Night is the second in the Coughlin Family Saga, following on from the critically acclaimed The Given Day.

Boston, 1926. The 1920s are roaring. Liquor is flowing, bullets are flying, and one man sets out to make his mark on the world. Prohibition has given rise to an endless network of underground distilleries, speakeasies, gangsters, and corrupt cops.

Live by Night starts with Joe Coughlin meeting the future love of his life, Emma Gould, in the most unusual of unromantic circumstances: He’s robbing the casino where she works for a local mobster, and it’s his job to tie her up.

Within seconds of meeting Emma, he falls in love—despite the fact she’s the girlfriend of Boston’s most notorious gangster. She’s more than a match for Joe in the cool stakes:

‘The girl came back to him with the bag of poker swag. “Your dessert, sir,” she said and handed him the bag. He couldn’t get over how level her gaze was. She didn’t just stare at him, she stared right through him. He was certain she could see his face behind the handkerchief and the low hat. Some morning he’d pass her walking to get cigarettes, hear her yell, “That’s him!” he wouldn’t even have time to close his eyes before the bullets hit him.

He took the sack and dangled the set of cuffs from his fingers. “Turn around.”

“Yes, sir. Right away, sir.” She turned her back to him and crossed her arms behind her. Her knuckles pressed against the small of her back, the fingertips dangling over her ass, Joe realizing the last thing he should be doing was concentrating on anyone’s ass, period.

He snapped the first cuff around her wrist. “I’ll be gentle.”

“Don’t put yourself out on my account.” She looked back over her shoulder at him. “Just try not to leave any marks.”’

For better or for worse, after that brief encounter, Joe’s life is about to change forever.

The fact that his father is a high-ranking and well-known Boston police captain does little to deter the young Coughlin from his on-the-edge escapades. If anything, it seems to galvanize him into unholy actions throughout his life.

Joe prefers to live by night, with no intention of following the rules of those ordinary folk who live nine to five lives.

But life on the dark side carries a heavy price. In a time when ruthless men of shark-like ambition, armed with cash, illegal booze, and guns, battle for control, no one—neither family nor friend, enemy nor lover—can be trusted. Beyond money and power, even the threat of prison, one fate seems most likely for men like Joe: an early grave. But until that day comes, he’s determined to live life to the hilt.

Joe embarks on a dizzying journey up the ladder of organized crime that takes him from the flash of Jazz Age Boston to the sensual shimmer of Tampa’s Latin Quarter to the sizzling streets of Cuba.

Dennis Lehane is a natural and captivating storyteller whose narrative ability makes Live by Night an epic, Steinbeck-esque saga of family, friends, foes, and femmes fatales—all interlocked in murder and redemption, love and betrayal.

Meticulously researched from beginning to end, this literary tour de force is certain to become a modern day classic.