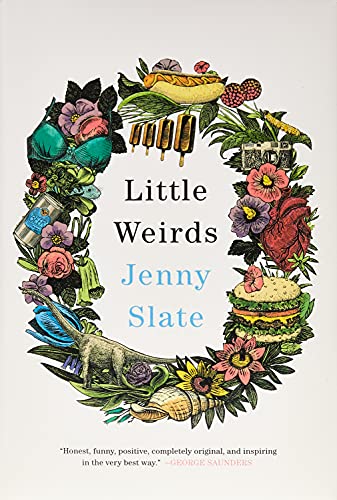 “It’s a book about the unexpected comfort of being a woman, of living alone, of having friends, of loving family members. It’s smart and unexpected and delightful.”

Jenny Slate’s writing is marked by a sweetness that brightens without overwhelming. Little Weirds is a series of short essays, reflections, and meditations elevated by Slate’s affinity for language and remarkable imagery. While Slate is fairly well-known as an actress, Little Weirds is less a celebrity memoir and more a quiet literary exploration of the daily life of a woman in her mid-30s living in a beautiful, layered city.

“I Was Born: The List” articulates identity and location in time as a series of objects and cultural moments. She announces her birth “during the great Potato Chip, in the time of Jewish Deli Tongue Sandwich. I was born and the other items that were in the love net in which they caught me were Open Car Windows, Ghosts, Fear, Horniness, Rabbit Holes, Bird Nests, Emily Dickinson, Petticoats, Bustiers, Grapefruit Halves with Maraschino Cherry in the middle, Chapter Books, Secret Passages, Sesame Street, Mermaids starring Cher, a messy bookstore called New England Mobile Book Fair, Grandparents, Ham for Lunch, Gems, Treehouses, Annie Oakley, Chicken Noodle Soup, Crystal Gayle, Meet Me In St. Louis, A Stage, A Theatre, A Camera, A Bra, A Slip, A Mouth, A Butt and Vagina, Beer, Clarice Lispector, A Beech Tree, A Campfire, Romance, Music, Loneliness.” It’s a magnificent list, just two sentences in a larger work that layers meaning into relatable moments composed of anxiety and memory.

Much of Slate’s book meditates on the difficulty of being a woman (who admits to being a relatively rich, privileged white woman) in a society that smiles through its misogyny. Among the sequences of envisioning her own death is “I Died: Listening.” Slate works in Hollywood, in the midst of #MeToo, yet ultimately nothing changes. The sheer absurdity is fatal: “Some man was standing right in the middle of the room walking about how he knew that now was the time for men to listen, and he was proud to say that he knew how to listen, but strangely he kept talking for so long that I was the one who was listening and so then what happened was that my head twisted around on my neck and faced the wall.

“But that didn’t seem to bother him and it certainly didn’t stop him because I guess he was on a roll? And then he just walked around to the other side of me and kept talking, and what he was saying was so obvious but backward and wrong, but to tell him that would have caused a big bust-up.”

Here is a woman who wants to live quietly in a small, beautiful home with an old dog, and occasionally make art. If she’s surrounded by an aura of whimsy, she’s also aware that as many people find that irritating as find it charming. But living involves fury and confrontation that’s so emotionally draining as to be unimaginable.

Other women seem to have more self-confidence, more freedom. Other women are charming and admirable. Slate, or her persona, is perpetually disconnected and discontent: “I cried a lot on the airplane home, come to think of it. My life was not in place.”

Little Weirds presents itself as inconsequential meditations, but it’s a better book than that. It’s a beautifully written, free-flowing meditation on the comforts and discomforts of being. The moments of ecstatic joy are original and deeply charming. (“Do you or do you not want flowers that stick to a dog’s face? Yes or no?”) The presence of the old dog is poignant. (The dog doesn’t die. Breathe easy.) It’s a book about the unexpected comfort of being a woman, of living alone, of having friends, of loving family members. It’s smart and unexpected and delightful.