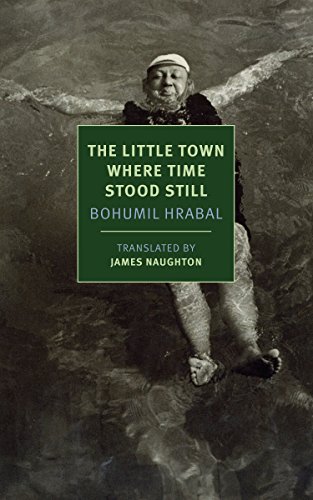 “charming and vivid if erratic and sometimes offal.”

How much one enjoys The Little Town Where Time Stood Still will depend to a certain extent on how much one wants to read about animals and their slaughter. Horses, pigs, offal, butchering, blood. Page after page, chapter after chapter. Hrabal’s book drips with the physical realities of working class rural life.

The Little Town is comprised of two linked novellas, the title story and “Cutting It Short,” which were originally published, illegally, in 1973 and 1976. The first thing that may strike the reader is how long the sentences and paragraphs are. Some paragraphs stretch out for nearly the length of a chapter. This can be awkward and challenging but is well suited for capturing, and perhaps instigating, the exuberant, fast-paced, and breathless gallop of the narrative.

“Cutting It Short” concerns Maryška, the wife of Francin, who runs a brewery. She is profligate, irrepressible, unapologetic, hard-drinking, and unconcerned with the niggling concerns of polite society or a woman’s place. She climbs chimneys; feels the wind in her unkempt and unrestrained hair; embraces the soot, blood, and grime of life. Her husband remains in the shadows, a small and gray figure, a Peanuts adult muttering incomprehensibly in the background, while Maryška takes center stage, riding her bicycle into the emerging technicolor of the modern world.

Hrabal writes in simple, loose, concrete, highly visual style. His constructions are frequently awkward if also generally pleasant and ecstatic. “I like those few minutes before seven o’clock in the evening, I like looking upward for those few minutes when the light drains from the bulb like blood from the cut throat of a cock.” A promising start, but the passage continues:

“I like looking at the fading signature of the electric current, and I dread the day the mains will be brought to the brewery and all the brewery lamps, all the airy lamps in the stables, the lamps with round mirrors, all those portly lamps with round wicks one day will cease to be lit, no one will prize their light, for all this ceremonial will be replaced by the light-switch resembling the water tap which replaced the wonderful pumps.”

The syntax, here, betrays the sense and clarity of the text. The ensuing sentence, moreover, is 12 lines long, the effect of which is quite enervating and presents a dilemma for the reader who wants to process and understand all the images, thoughts, and phrasings that Hrabal insists on cramming into such a tight space. The author, like his protagonist, could do with some restraint.

The second piece, “The Little Town Where Time Stood Still,” focuses on Pepin, Maryška’s brother-in-law. Like Maryška, or someone who walked off the pages of a Bellow novel, he’s incessantly doing. Talking, laughing, arguing, moving, loving, thinking. We follow him through the Occupation and the new communist order following the war. As with the first novella, “The Little Town” shows an old world that has come to change, and change again, along with characters who are both drawn to and repulsed by this fact.

Hrabal tells his story, such as it is, not by action or plot but with the accumulation of many, often frenetically represented, details. He is building a set and stocking it with lively, colorful characters. They run on batteries. He flicks the switch and lets them scamper across the stage, amusingly, perhaps, but without much direction or weight. Hrabal’s work, like Maryška’s world, is charming and vivid if erratic and sometimes offal.