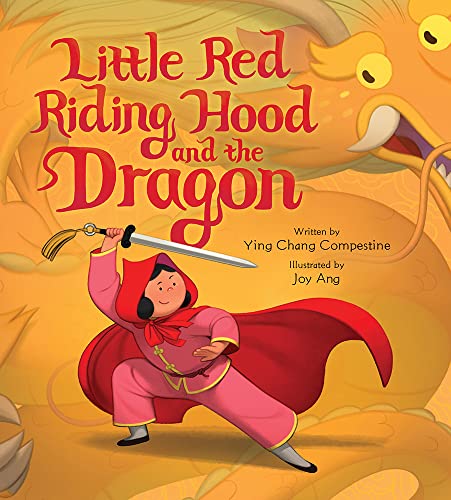 “a fresh and entertaining read.”

Our tale opens on “Gentle Wolf” who explains that the old Red Riding Hood story is not actually how the story happened. Red Riding Hood and her grandmother were not eaten up, nor were they rescued by a woodsman. Gentle Wolf insists that he, “certainly was not the one who ate them.” Instead . . .

We flash back to once upon a time near the Great Wall of China, a grandmother (Nainai) made a red silk hooded cape for her granddaughter to wear practicing kung fu. As young ones are prone to do when they love something, the young girl wore the red hooded cape all over town, spinning and kicking kung fu moves every which way, earning her the name “Little Red.”

Grandma Nainai falls ill, so Little Red and her mother make pungent soup and sweet cakes for Little Red to take to her. Along the way she runs into Dragon, who is blocking the path near Nainai’s house. Dragon tricks Little Red into thinking she needs ginseng for her grandmother’s tea. She wanders off to find some, giving Dragon the time he needs to go to Nainai’s house, eat her, and assume her bed-ridden identity. The classic scene of, “Oh, Nainai, what big teeth you have,” plays out and Little Red ends up in Dragon’s stomach along with Nainai.

Little Red and Nainai aren’t all that is in Dragon’s stomach though. Dragon, it seems, is not a discriminating eater. Little Red rummages around the piles of undigested items that Dragon has consumed. She finds a Chinese yo-yo, a long silk ribbon scarf, a suona Chinese musical instrument and a drum, as well as the pungent soup and sweet cake basket she had been carrying all this time. Little Red wastes no time putting these items to good use.

Taking the Chinese yo-yo in hand, Little Red flips it all over the inside of Dragon’s stomach, making Dragon very uncomfortable. Using the long silk ribbon scarf, Little Red spins around in circles, rattling Dragon even more. Little Red blows the suona while Nainai pounds the drum. Dragon can’t stand the noise.

Finally, Little Red takes the pungent soup and sloshes it around Dragon’s stomach until he finally heaves the entire lot of stomach contents out onto the ground in one gigantic retch.

Little Red stands up to Dragon, kung fu sword in hand and red hooded cape donned, and tells him to, “SCRAM!” And that is the last time a dragon has ever bothered girls in red capes in China.

All of this is true, according to Gentle Wolf, because he saw it all, as a constant eyewitness, always on the lookout watching over Little Red. Indeed, every illustration has Gentle Wolf somewhere in the background playing the omniscient observer roll (except for the time Little Red and Nainai were inside Dragon’s stomach—no Gentle Wolf in there.)

First impressions are that Little Red Riding Hood and the Dragon is a fun, fast-paced, action-packed read. The illustration sequence of Little Red and Nainai inside of Dragon is excellent. There is very good storytelling happening in the back and forth views alternating between what is happening inside the stomach and how it is impacting Dragon outside the stomach. These are very clever and effective animations. It is easy to see Ang’s digital art background in comics, video games and animations. Her style, Disney-esque, will have a wide appeal.

Second impressions, however, raise two big questions about the nuances of the story. Perhaps none of these matter much, but inquiring minds sometimes want to know: what was so bad about the original version of Little Red Riding Hood? Why was it necessary to say it was wrong. Why not just say that this is how the story unfolded in China? Not “right,” just “different.” The overall story would be stronger without this jab.

The other question has to do with the narrating presence of Gentle Wolf. The way in which this story is told makes Gentle Wolf’s character necessary. However, in a retelling of a story in which the main character, Little Red, is being billed as a self-determined, self-actualized, self-rescuing heroine, why does Gentle Wolf have to follow her everywhere? It’s a little creepy and it dilutes Little Red’s empowerment. It sends the message that Little Red might possibly get into a scrape so bad that she can’t kung fu her way out of and will still need help that only Gentle Wolf will be able to provide in a timely fashion because he’s looking out for her, constantly.

Gentle Wolf’s closing remark about how he knows this true story firsthand pulls heavily on his bruised ego and the bad reputation the original version gave him. The final illustration has Gentle Wolf sitting in a bucolic countryside telling this tale (pleading his case?) to the Three Little Pigs (another big bad wolf story!)

Ending the book this way changes the entire message. It’s not about empowering girls to solve their own jams, instead it’s about clearing Gentle Wolf’s reputation. Bummer. We were just cheering for Little Red, now we’re thrown a curve ball by an expunging wolf. As endings go, this one is offbeat. If the reader sticks with their first impressions, though, Little Red Riding Hood and the Dragon will be a fresh and entertaining read.