The Little Old Lady Who Broke All the Rules: A Novel 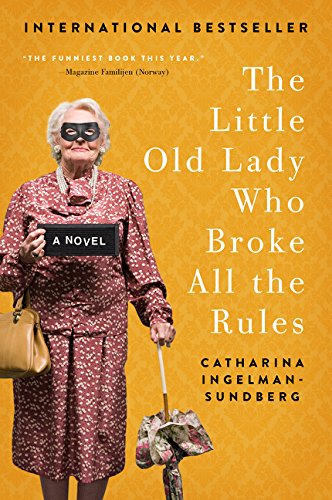 Were you planning to place a loved one in a retirement home sometime soon?

Don’t do it. Send them to prison instead!

At least that is the premise of The Little Old Lady Who Broke All the Rules, Catharina Ingelman-Sundberg’s entertaining story of pensioners gone bad.

Fed up with the austere conditions instituted by the new management at Diamond House, the retirement home in Stockholm where they live, feisty resident Martha Andersson, 79, and her four similarly senior companions decide they would be better off in jail. From the documentary they’d seen on television showing how well prisoners are treated in Swedish prisons—better food, outdoor exercise, leisure activities—it seemed conditions there couldn’t be worse and were probably better than living in their retirement home.

But to get into prison they would have to commit a crime. Not just any crime, but one serious enough to warrant jail time, though not so serious as to result in a very long sentence. (After all, at their age they couldn’t afford too many years out of circulation.) And if they pulled off a big enough robbery and hid the money well, they’d have a fund with which to enjoy life after they were released.

So the five friends, calling themselves the League of Pensioners, escape (literally) from Diamond House, billet themselves in the luxurious Grand Hotel, and set out to commit the imperfect crime—one that will be lucrative but ultimately land them in prison.

Unfortunately, they inadvertently commit the perfect crime. Equipped only with their ubiquitous Zimmer frames (walkers) and a few basic tools, they steal two priceless paintings from the Swedish National Museum and hold them for ransom, assuming they would soon be caught and on their way to prison.

Instead, their crime leaves the police totally baffled. Nor does their intended return of the paintings for a ransom go as planned, when the paintings disappear from their custody. It’s Topkapi meets the Lavender Hill Mob, with a little Keystone Kops thrown in.

Whether the pensioners finally make their way into prison, and how their taste of luxury and success in crime affects their later plans—and them—makes up the rest of the story.

And speaking of conditions at retirement homes, fans of the popular British television series Waiting for God will probably find Diamond House very familiar: There’s the unscrupulous manager who cares only for the bottom line; the female assistant who lusts after the manager’s body; and the tough-minded senior resident who is a constant thorn in the management’s side.

Then there are the dubious coincidences (how convenient Nurse Barbara chose to stay away with her lover just when the pensioners were making their escape) and the pensioners’ uncanny ability to pull off daring robberies in public places and broad daylight with no one seeming to notice. But it is the nature of “caper” novels, of which the late Donald Westlake’s Dortmunder tales are perhaps the best example, to create elaborate schemes that, if they aren’t quite realistic, make us wish they were.

The Little Old Lady Who Broke All the Rules is, then, a pleasant piece of comic crime fiction with some very clever plotting. But it is more than that: It is a condemnation of the manner in which our society—and certainly not just in Sweden—treats its older generation. When the children of one of the pensioners, whom they had virtually discarded as they awaited her death and their inheritance, learn she was involved in one of the greatest heists in Swedish history, they come to see her in a very different, more respectful light.

In this and various other ways the story continually makes the point, to use the phrase that the League of Pensioners emblazons on their luggage, “Old People are Capable.” And one of the things they are capable of is falling in love at this late stage of life. These characters might be octogenarians, and they might have physical limitations, but their minds are sharp and their passions undiminished by time. They intend to live their lives fully to the last day; and pity not them, but the members of the establishment who dare to get in their way.