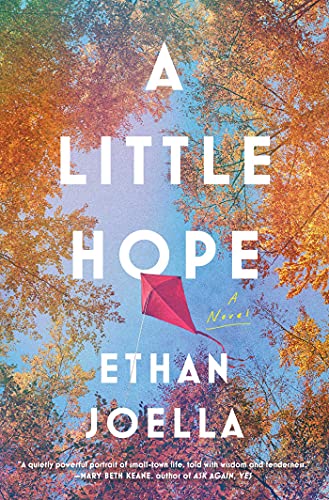 “This is Joella’s first novel, and it’s an assured performance, full of nicely observed detail. It may not have a Big Theme, but it has lots and lots of heart.”

If you like your prose experimental, you probably won’t want to open Ethan Joella’s A Little Hope. It’s an old-fashioned novel, by which I mean it’s a big, warm-hearted story—not so much about one person, but an axis of acquaintance in small-town Connecticut.

Greg Tyler is a hard-charging executive who loves his wife, Freddie, and young daughter Addie, but tends to express his feelings via the comfortable lifestyle he leaves behind as his job at Garroway & Associates takes him around the world. But Greg is stopped short by a multiple myeloma diagnosis. He doesn’t want to reassess his life, but he has no choice.

A Little Hope broadens out like what the Grateful Dead called a “ripple on still water.” Freddie has a part-time job as a seamstress, and so we’re introduced to her recently widowed, business-owning boss. And she has a troubled musician son, whose inability to get it together cost him the love of his life. And Greg’s older boss, Alex, lost his young son to a freak accident, and so refuses to stay in the background as his favorite employee faces a tough future.

Joella could have just kept on going exponentially, and then we’d be dealing with a sprawling cast and a 1,000-page tome just waiting for a mini-series. But the ripples don’t go out all that far, and there’s space—even within 275 pages—to fully inhabit the varied characters we do meet.

Nobody in this book has it easy, and none of them are people you’ve met before. Imagine that someone you know is given a dire cancer diagnosis and you hear about it in passing. Some of these folks are peripheral to Greg Tyler’s life, but their challenges and triumphs are briefly thrust into the foreground. The filmmaker Richard Linklater used a structure somewhat like this for his first major feature, Slacker. It worked for him, and it works here, but without the conspiracy theories.

There are a few melodramatic plot twists here. A strategically placed car crash seems an awfully convenient way of getting rid of a major character. If two women here are worrying about whether they’re with the right guy, is that one too many? The ending is maybe a little pat.

But most of the doings in Wharton, Connecticut—in Fairfield County somewhere?—ring true. And the inhabitants are people you’ll want to meet. There’s Hannah, the second-best girlfriend, who’s always being underestimated. And Suzette, whose wedding is disrupted by some dire bridesmaid outfits—as well as cold feet on the part of the bride. She once bailed after a few days teaching in Finland, so maybe she’s doomed to repeat herself. Luke, the troubled but curiously irresistible son, will have to be played by a young Keanu Reeves type if the movie gets made.

This is Joella’s first novel, and it’s an assured performance, full of nicely observed detail. It may not have a Big Theme, but it has lots and lots of heart. You won’t find Wharton on a map, but a visit to the local bookstore will get you there.