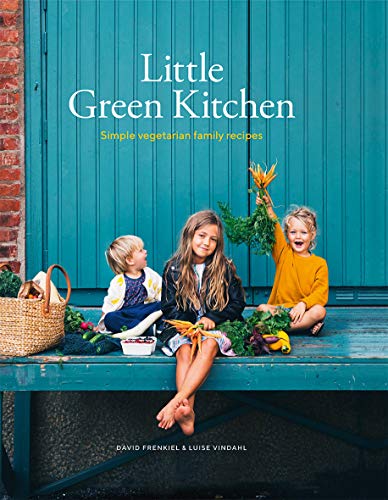 “Children who cook become children who taste and often eat. Get the kids to clean, scrub or peel the potatoes and carrots. Spiralizing vegetables and apples is also lots of fun.”

Once upon a time in a “Little Green Kitchen,” sat a family at home in Stockholm, Sweden, savoring the delicious creations that Luise Vindahl, the mother, was cooking one summery night. David Frenkiel, the father, was busy at work photographing their three children, Elsa, Isac and Noah, who were enthusiastically eating hearty and robust vegetarian food. Although the three children resemble fairy tale characters with their blond locks of hair, they are real children in this fairy tale.

The cookbook, Little Green Kitchen, is the creation of Luise Vindahl and David Frenkiel. This story of recipes is about a family that loves to cook together. The cookbook is based on simple vegetarian family recipes. There is no Hansel and Gretel being fed gingerbread to fatten them. Instead there are three Swedish children blooming on homegrown vegetables.

This is a cookbook about family, love, and connection. It is a cookbook that focuses on raising children and providing them with a healthful diet that benefits them now and in the future.

Luise Vindahl considers herself quite fortunate to be the mother to “three wild and vegetable eating kids.” Unlike Luise, who will on occasion eat meat, David has been a vegetarian for more than 20 years.

What is the recipe for a successful cookbook? The ingredients might include images of happy and playful children enjoying themselves in the kitchen. Add inventive elements that include a recipe for rainbow pancakes and a touch of honesty that represents life with three small children. Include a philosophy for healthful eating that “centers around vegetables, whole grains, good fats, natural sweeteners, nuts, seeds, pulses (legumes) and fruit.”

We know that children are more likely to eat the food that they help harvest, clean, and cook but having children in the kitchen is both fascinating and terrifying.

For example, how does a child learn to handle a large chef’s knife? How does a parent protect their small child from burns? There are rules that can be followed and are outlined throughout the cookbook that will prepare them to prep and cook responsibly.

Parents recognize that it can be a tug of war to get their children to eat vegetables. Since the recipes in the Little Green Kitchen cookbook are vegetarian, the authors have proffered some advice. They relish having conversations with their children about food, how it is grown, and where it comes from.

In this cookbook one will find vegetables in all types of recipes. Vegetables are added to smoothies, bars, muffins, and desserts. Blend spinach and carrots into pancakes and mix quinoa into burgers. There’s no harm in adding lentils to a tomato sauce. It adds texture to an otherwise smooth pasta sauce.

After every recipe there is a phrase or two of advice called “A Helping Hand.” It is one or two sentences that suggest how children can help in the kitchen. For example, they suggest using a kid-friendly knife and allowing the children to be tasters before a recipe is complete. The children eat and eat and critique their mother’s cooking. It sounds like a fun time for all!

David Frenkiel and his wife Luise Vindahl have discovered the ingredients for a successful cookbook: photograph your three beautiful children playing and laughing among carrots, radishes, berries, squash, and other beautifully laid out vegetables. Include healthful delicious original recipes that appeal to both children and adults, and include a chapter on baking and sweets that makes one’s mouth water. Especially worth mentioning are the Mini Raspberry Cupcakes. Made into mini muffins, they are moist and flavored with untraditional spices. The combination of coconut, banana, almonds, and cardamom meld together to form the perfect bite made more healthful by eliminating refined sugar.

The recipes in this creative cookbook are tasty and delicious. Each chapter has new and innovative ideas. Orange Bliss Balls, a sweet snack, sit in the refrigerator eagerly waiting to be snapped up by little hands. Nobody will notice the spinach that has been added to the Sweet Potato and Spinach Muffins eaten usually in the late afternoon when energy wanes. Omelette rolls with broccoli pesto suggests that the children have mature palates. The All-in-One Lasagne provides a filling dinner anytime of the week.

Children who cook become children who taste and often eat. Get the kids to clean, scrub or peel the potatoes and carrots. Spiralizing vegetables and apples is also lots of fun.

Although Jack and his Beanstalk and Snow White’s apple do not make an appearance in any of the recipes, this cookbook provides ways to involve children in the kitchen. In fact, it is not a fairy tale at all but the genuine life of a contented, peaceful, and fulfilled family.