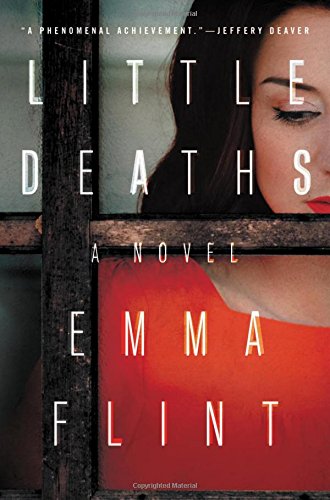 Now imagine all this happened to you in Queens, New York, in 1965.

Yeah, it would still be horrible but different.

That’s the idea behind Little Deaths, a first novel by Emma Flint, a British writer who lives in London. In what would otherwise still be an enthralling crime novel, Flint adds the element of womanhood and motherhood to elevate her story into something well beyond the average whodunit.

Ruth plays men like a virtuoso, knowing precisely what they like and where they want to touch her. She is a conductor in bed, leading the hapless men through an intimacy they imagine but cannot construct on their own. She is magic as the men often tell her but when they leave—as they inevitably do—her demons come roaring out.

“Then she steeled herself and looked down.
“Naked sagging stomach, stretch marks, thighs with telltale dimples, a rash on her calf, a missed penny of hair on her ankle, breasts slumped sideways, and that ripe, yellow smell.
“Like a bitch in heat.
“Like a whore.
“She was a monster.”

Emma Flint captures Ruth Malone, a Queens housewife, perfectly. Some of the other New York characters—the cop, the senior reporter, the mobster—feel like they’ve been dredged up from central casting, but Flint does much better with Pete Wonicke, an eager-to-please but out of his depth rookie reporter who can’t seem to catch a break.

You feel for Wonicke who becomes so obsessed with Ruth Malone that he loses his job and takes a very risky gamble that could land him jail.

He’s determined to solve the mystery of what happened to Ruth’s children and is appalled how the senior detective on the case seems determined to set her up, constantly referring to her as a “bitch.”

In Wonicke’s mind, he’s the only one who understands Ruth, who mostly seems not to notice him all that much. She’s got her own problems, plenty of them.

But the two are alike in one way—both of them live in their own minds, oblivious to the catastrophic winds blowing around them, not following social cues that might help them get along.

If you’re an aficionado of New York murder cases, you’ll recognize Ruth Malone instantly as Alice Crimmins, the redheaded tabloid sensation and cocktail waitress who actually lived through the murders of her two young children back in 1960s Queens. And if you think what happens to Ruth Malone is incredible, you ought to look up The Alice Crimmins Case by Kenneth Gross. If anything, it was worse.