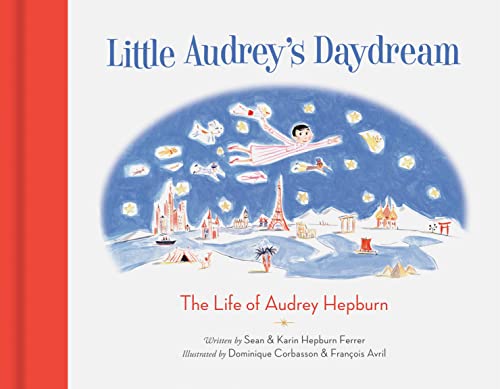 “Little Audrey’s Daydream: The Life of Audrey Hepburn, would make a nice choice for a young person doing a biography on a famous or influential person.”

Little Audrey’s Daydream: The Life of Audrey Hepburn, is a story about the life of Audrey Hepburn, written by her son and his wife, Sean and Karin Hepburn Ferrer. There is much to like in the telling of her storybook life, although the beginning during war time wasn’t as charmed. “So we hid in our cellars, which most families turned into living rooms with sofas and radios. A little dust would fall from the ceiling every time a bomb exploded close to home.”

The story is told in the past tense up to the point where Audrey stays in bed all day to “preserve our calories.” Then the story switches to the present tense. Audrey begins to daydream about her life, as a prima ballerina, playing dress-up in the attic and then performing, about her getting discovered and given a part in a film, about the roles she will play, about when she becomes famous, about her future children and living in Switzerland, how perfect her life will be. She dreams of staying home and becoming a full-time mum, and how she will travel to countries at war to help feed hungry children.

Then her mum calls out, “It’s bedtime,” and the daydream is over. Audrey falls asleep, and the book is done. The change of tense seems odd for a couple of reasons. One, how could anyone daydream the rest of their life? And two, why rearrange the order of events except to serve the title? That and the line referring to Switzerland that says, “A neutral country is one where war is not allowed” strikes this reader as statement needing an asterisk and further explanation.

One nice thing about the book is the repeating line of “smiling in the dark” while watching a movie or having enough food to eat or thinking about being a good person.

The art by the husband-wife team is charming and similar to the great art of the Madeline books by Ludwig Bemelmans. The pages are mostly white with simple art of strong black lines, deep reds, and soft pastels, except the war pages, which show oranges, mustard, gray and black. The white end papers are hilarious with Audrey dressed all in black doing her dance moves.

The back of the book has a “more about” page, an explanation of the use of the daydream, and half a page about the illustrators, bringing the page count to 56.

This is a classy addition to anyone’s biography shelf. Little Audrey’s Daydream: The Life of Audrey Hepburn, would make a nice choice for a young person doing a biography on a famous or influential person.