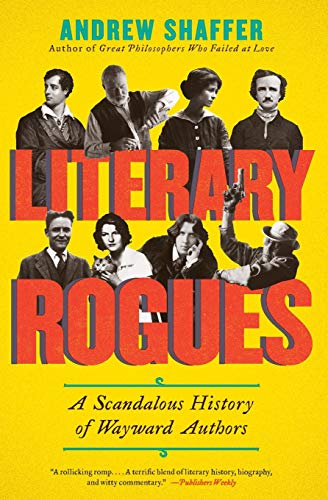 “Pouring out liquor is like burning books.” —William Faulkner
“It is difficult to differentiate, with any sureness,
between insanity and eccentricity.” —Dylan Thomas
“It is necessary to be always a little drunk.” —Charles Baudelaire

These are but a few of the infamous quips attributed to the ensemble cast of the most revered elite poets and writers of all time. Each chapter of Literary Rogues: A Scandalous History of Wayward Authors begins with either a witty or provocative quote that introduces the literary giants of each century.

Sexually transmitted diseases, tempestuous relationships, drug and alcohol addiction, depression, and suicide are but a few of the issues that plagued writers throughout time. Author Shaffer brilliantly chronicles both the excesses and triumphs of some of the most talented and notorious of them all.

A double-edged sword has hung over the lives of the most creative geniuses. The dichotomy is that these extraordinarily gifted writers explored the heights and depth of emotion, allowing them to express those feelings in magnificent poetry and prose. Yet this same exploration of the gamut of pleasure and pain often led to a slow and painful path of self destruction.

And the dark side of genius was not a pretty sight.

Decadence, debauchery, and scandal appeared to be inevitable outcomes of dancing dangerously close to the edge.

There seemed to be a folie à deux (shared hallucination) among the writers highlighted by Mr. Shaffer. Most of them lived life with such abandon that behavioral and physical consequences did not appear a consideration. Yet while seemingly enjoying life to the fullest, their dark moods, hopeless drug addiction, and suicidal thoughts continued to plague them. This enigma is difficult for people to comprehend since most writers (as well as people in general) deeply desire to achieve status and recognition.

There are so many intriguing examples of writers gone awry in Literary Rogues it is difficult to enumerate them all. It would be very helpful if the reader had some knowledge of famous literary works in order to understand the breadth and complexity of these geniuses.

One of the most public examples of a genius gone awry is the poet Lord Byron whom some consider one of the most prolific poets of all time. In 2008 a British paper called the Sun ran a story about Byron with the title “Lord Byron’s Life of Bling, Booze and Groupie Sex.” As author Shaffer explains, “Byron’s macabre habits such as firing pistols indoors, drinking wine from his ancestors’ skulls did little to alleviate his depression.”

Even as Byron achieved fame his tendency toward melancholy did not abate. In fact, he is noted for saying, “Fame is but like all other pursuits, ending in disappointment—its worthlessness only discovered when attained.”

His frequent sexual trysts—like those of many other writers—held little lasting enjoyment. During his first year of marriage, he dabbled with both men and women, but the love of life was his half-sister who became pregnant at some point. He was so taken with her that he carried a lock of her hair with him. In a startling decision he invited his half-sister on his honeymoon—though she chose not to go.

Born into an aristocratic family, The Marquis De Sade will never be forgotten for his bizarre behavior. In fact it wasn’t until he received a life sentence for poisoning and sodomy that he began to write novels. His books contained the topics of “sexual violence, torture, rape, incest, pedophilia, bestiality and cannibalism.”

At some point after his early release he was deemed to be ill with “sexual obsession” and sent to an institution. The word “sadism” (originally sadisme in French) was coined to describe a person who feels pleasure only by inflicting pain on others.

There are so many lives of famous writers to digest in Literary Rogues, it becomes almost impossible to delineate all of the sordid but fascinating details. The lifestyles and perils of F. Scott Fitzgerald, Edgar Allan Poe, Oscar Wilde, Hemingway, and Faulkner also receive due homage. A reader can quickly become captivated by these complex, real-life characters.

The various poets and writers chosen by Mr. Shaffer to highlight include both the extremely famous to the more unknown to the average person. Their fascinating lives and timeless work will likely continue to be discussed for years to come, making the Literary Rogues a relevant examination of the creative personality.

In addition, Andrew Shaffer offers a unique brand of humor celebrating these enigmatic writers who seemingly possessed no boundaries in their quest to live life to the fullest, perhaps forgetting that consequences inevitably follow each decision or choice.

Laura Schultz’s poetry has been published in such venues as Forth magazine, Writers News Weekly, Abandoned Towers magazine, and Empowerment4women.com. She was the only U.S. poet asked to contribute her work to the international anthology Sudden Thunder. Her personal essay “A Poet’s Journey” was published in Coal Hill Review. Her first poetry book, Arise and Shine: Laments of the Darkness, Songs of the Light, was released by Silver Bow Publishing in 2011.