Listening for Madeleine: A Portrait of Madeleine L'Engle in Many Voices 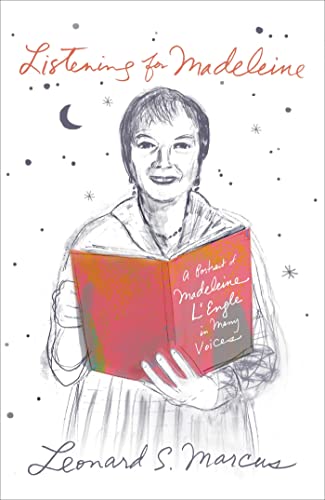 “. . . brings the author to life beyond what she conveys in her own pages. . . . [a] thorough presentation of her life.”

Mr. Marcus has hit on a great way to do biographies: Interview myriad people who knew the subject and let them tell their stories about her.

In this case, they talk about author Madeleine L’Engle, best known for her Newbery award-winner A Wrinkle in Time, but who also was a prolific writer of fiction and nonfiction for youth and adults. Combined, the 51 contributors justify the book’s subtitle—“a portrait of Madeleine L’Engle in many voices.”

All but one of the many voices—maybe one and a half—either loved, admired, or were bemused by this complex woman, who died in 2007. Oddly, the one voice we don’t hear is that of Mr. Marcus, even though he interviewed Madeleine for a different project back in 2002. He gives us a brief sketch of that encounter in his Introduction but otherwise uses that space to outline her life story. Then he steps back and lets others fill in the blanks.

Those others range from Madeleine’s grandchildren to her spiritual advisor, reflecting the impressive scope of her life. We hear from her childhood friends, publishing colleagues, college and adulthood cronies, neighbors, students, relatives, writing peers, people she associated with at various churches, and a sampling of her protégés.

Madeleine is described by her granddaughter as a person who cast a big shadow, which most agree resulted from throwing herself heart and soul into the writing life and sharing the experience with darn near everyone. That writerly life differed from the cliché of an introvert scribbling away in an ivory tower.

(While yes, she actually had a tower—a so-named private space built for her over the garage at her home in Connecticut—she could and did write in other places: on the road to her innumerable speaking engagements; in the library of the cathedral where she served as librarian and maintained an office; or anywhere else opportunity allowed.)

It’s hard to imagine how she managed it, because she spent so much time interacting with other people. She conducted seminars and retreats, taught classes, mentored aspiring writers, hosted dinner parties, toured for book promotion, worked in key positions for the Authors Guild, put on plays and pageants, traveled for pleasure, and raised a family.

Throughout, she wrote more than 60 books.

Madeleine worked through the heyday of contemporary publishing, the 1960s through 1990s, before individual houses were consumed by conglomerates and ebooks entered the picture. People working in the industry today may be surprised by or nostalgic about how different those days were from now, and authors may envy the involvement and support that Madeleine received from her publishers.

Combined, they allowed Madeleine to build a career and a huge following. Her books have sold millions of copies and several have become classics. A Wrinkle in Time is celebrating its 50th anniversary, and continues to find new readers despite a bumpy history that included dozens of rejections when she was first submitting it, and being banned several times when it wasn’t winning awards.

Such reactions came from its groundbreaking mix of science fiction, fantasy, literary exploration of love and spirituality, and youthful adventure featuring females: a mix that tends to polarize, especially during the time the book came out.

Madeleine’s work has inspired many more people than it has alienated, however. Her unique mixture can be found to different degrees, and in different combinations, in all of her books.

Mr. Marcus’s respectful biography brings the author to life beyond what she conveys in her own pages. After reading his book, anyone who didn’t know Madeleine L’Engle during her 88 years on Earth will be sad they missed her; happily, they can get to know her up close and personal thanks to this thorough presentation of her life.